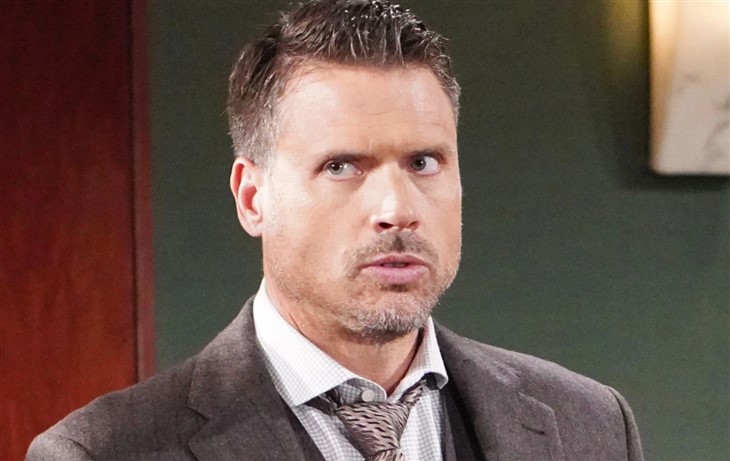 The Young and the Restless (Y&R) spoilers tease that Nick Newman (Joshua Morrow) will go to battle for Sally Spectra (Courtney Hope) against his father, Victor Newman (Eric Braeden), unaware that Sally betrayed him with Adam Newman (Mark Grossman).

Victor will approach his son, demanding he cut ties with Sally. He will say it’s not a good idea to have a relationship with her, suggesting Nick is taking Adam’s sloppy seconds. Nick won’t agree and will inform his father that his love life is none of his business.

Victor is on a mission to save his children from making big mistakes. First, he visits Chance Chancellor (Connor Floyd) to learn why he and Abby are having trouble in their marriage. After demanding Chance fix his marriage, Victor turns to Nick to meddle in his relationship with Sally.

Y&R spoilers state that Nick refuses to listen to his overbearing father. He will insist that his relationship with Sally is not his business and will date whoever he pleases. Victor won’t like Nick’s defiance. He declares that he will discover what Sally is hiding because he feels she isn’t what she seems.

Victor may not find anything on Sally when he investigates her background. Sally has been upfront about her past and embraces her mistakes as life lessons. However, he could discover her betrayal with Adam, which would devastate poor Nick.

Nick trusts Sally and believes her relationship with Adam is dead. Little does he know, during the week of November 28, Sally will hook up with Adam, sharing a passionate moment with him in her hotel suite.

Victor may find out about Sally and Adam before Nick does. If he does, it will validate his issues with Sally.

Y&R spoilers state that Victor believes Sally will cause tension within the Newman family. She’s proving him right by sharing a steamy moment with Adam behind Nick’s back. It’s only a matter of time before Nick or Victor discovers Sally’s betrayal.

Nick will regret rejecting his father’s advice about Sally. Before it is all said and done, Sally will leave Nick for Adam. Young and the Restless viewers believe Adam and Sally will walk down the aisle by New year’s Eve.

Y&R fans, do you think Victor will find out about Sally and Adam? Keep watching Young and the Restless, airing weekdays on CBS and streaming on Paramount Plus. This site is a leading source for everything linked to The Young and the Restless. Check back regularly for Y&R spoilers and news!