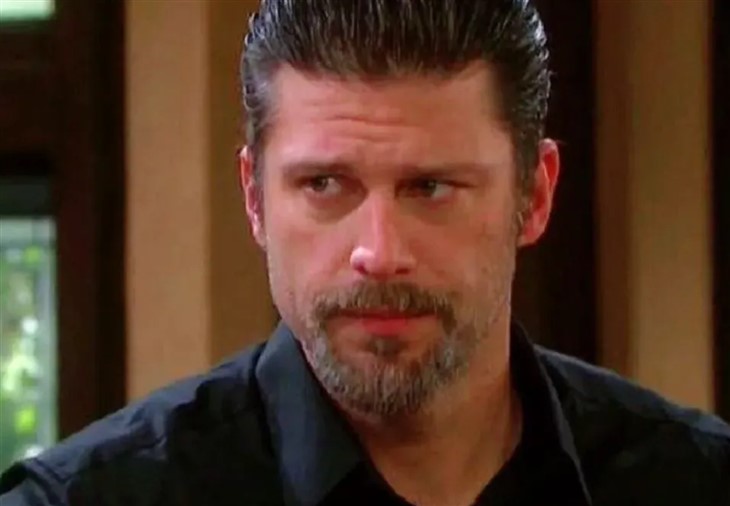 Days of Our Lives spoilers and updates tease Eric Brady (Greg Vaughan) will spiral and go after EJ DiMera (Dan Feurreriegel) in a jealous rage! After EJ and Nicole Walker (Ariannne Zucker) spend a drunken night together, he’ll find out somehow and tear into him.

Days Of Our Lives Spoilers – Confronted Together

Eric sees EJ and Nicole together, apparently the night after the drunken hookup. EJ dares Eric to take a swing, and he swings him right off his feet and onto the floor in front of Nicole-that won’t go over well with EJ. Eric has a lot of built-up rage and he’s mad at Nicole and jealous over her at the same time, since if it weren’t for Nicole, there’d still be a baby.

Thanks to Nicole’s nosy interference and her not wanting Jada Hunter (Elia Cantu) to be tied to her and Eric, Jada informed Eric there wasn’t a baby. One minute he was celebrating fatherhood and handing out cigars, the next minute he was mourning another chance at fatherhood lost.

There’s no more forgiving Father Eric after this round of pain; he may start drinking too much himself, because he’s acting like a mad drunk. In the past few months he’s endured loss of his priesthood for helping his mother and doing exorcisms, coming home to Nicole remarried and moved on. He finally stopped fighting his feelings and finds out Jada’s having his baby, Nicole breaks up with Rafe Hernandez (Galen Gering) but talks Jada into terminating. He almost lost his mother again when except for a miracle cure-delivered to Salem University Hospital by Jada –she revived-that’s a lot of anger. This last betrayal was enough to throw Eric off balance, and he begins spiraling downward and will get even worse.

Eric’s life will continue to crumble around him although he appears to pull himself together when Marlena Evans (Deidre Hall) needs him by her side again. But for the time being, he’ll get himself in more trouble with his temper and EJ will press charges for the swing he took. If anyone, Nicole knows how much Eric wants his own child, and also that she can’t give him one so her influencing Jada was a tough, tough blow.

It’s understandable that he’s mad at Nicole, which led to her sleeping with EJ, for which neither had any excuse. No wonder Eric takes out his frustrations and takes that swing since EJ likely taunted him into doing so.