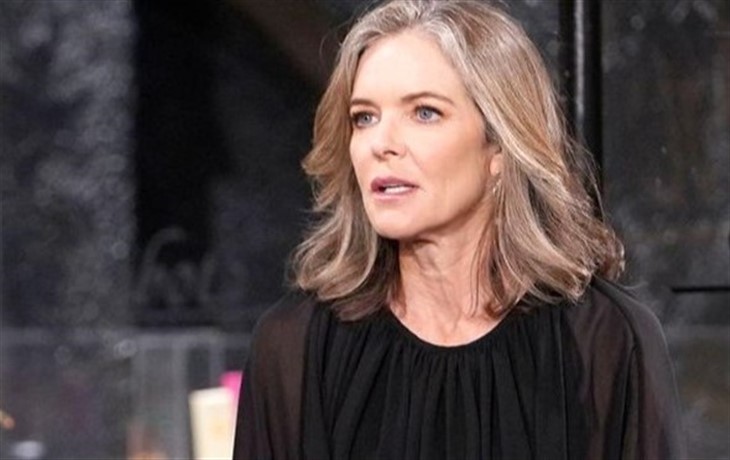 The Young and the Restless (Y&R) spoilers for the next two weeks are in. From December 5 to 16, Diane Jenkins (Susan Walters) will pack her bags. However, Jack Abbott (Peter Bergman) might stop Diane from running away. Meanwhile, Jeremy Stark (James Hyde) is on a mission while the Abbott family will be divided.

The Young And The Restless Spoilers  – Diane Jenkins Spooked

Y&R spoilers for the week of December 5 reveal that Diane will get rattled by Jeremy. When Jeremy shows up at the Abbott doorstep, Diane will deal with it the best that she can. It is teased that Diane invites danger into the Abbott home. So, it sounds as if Diane allows Jeremy to come inside.

Diane will worry about what Jeremy will do to her as well as Jack, Kyle Abbott (Michael Mealor), Allie Nguyen (Kelsey Wang), Summer Newman-Abbott (Allison Lanier) and Harrison Locke (Kellen Enriquez).

Even though Diane packs her suitcase, don’t expect her to leave Genoa City. It is hinted that Jack or Kyle will stop Diane from going anywhere. Jack and Kyle promised that nothing would happen to Diane. So, Jack and Kyle might suggest paying off Jeremy.

No matter how the Abbott family deals with Jeremy, there will be a divide. Ashley Abbott (Eileen Davidson) is determined to get rid of Diane. However, Jack feels that this Diane elimination fixation has gone way too far.

The Young And The Restless Spoilers  – What Else To Expect

The Young and the Restless spoilers for the week of December 5 reveal that Tucker McCall (Trevor St. John) will reveal his mysterious ally. There is reason to believe that Tucker and Jeremy are connected. Phyllis Summers (Michelle Stafford) might have made the call that brought Jeremy to Diane’s door, but everyone is connected in soaps.

Meanwhile, Jack will issue a stern ultimatum to Phyllis. Jack isn’t the only one who has something to say, though. Kyle will also blast Phyllis for putting Summer and Harrison in danger. Plus, Daniel Romalotti Jr. (Michael Graziadei) will have a secret, Billy Abbott (Jason Thompson) cheers up Chelsea Lawson (Melissa Claire Egan) while Chance Chancellor (Conner Floyd) makes a bold move.

Nate Hastings (Sean Dominic) will try to make amends. Sally Spectra (Courtney Hope) will sleep with Adam Newman (Mark Grossman) one last time. At least, she intends for it to be the last time. However, Nick Newman (Joshua Morrow) discovers the two in bed together. Fans can also expect Nick to test Summer.

During the week of December 12, Chelsea makes peace with another character. Phyllis intensifies her attacks on Diane. However, the plan backfires and Phyllis will face some consequences. The person most furious with Phyllis is her own daughter. Summer will blast Phyllis for putting little Harrison in danger.

Which storyline are you looking forward to seeing the most? Share your thoughts and remember to keep watching the soap to find out what happens next.