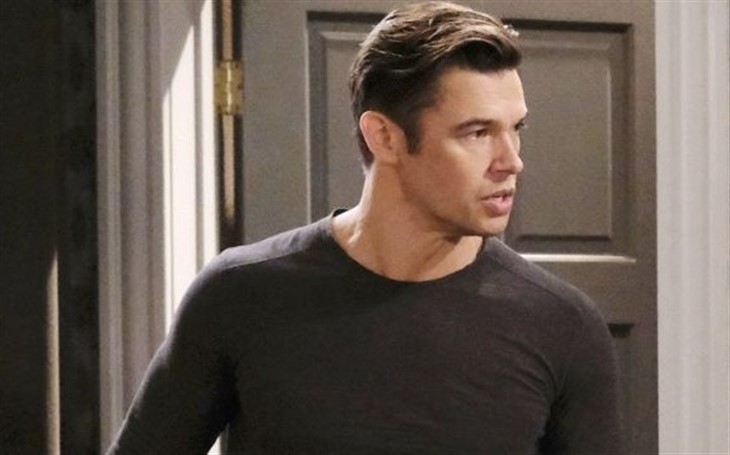 Xander will run into some trouble when Bonnie Kiriakis (Judi Evans) experiences some post-traumatic effects from when he trapped her in the potting shed with Susan Banks (Stacy Haiduk). Even though with Gwen’s help creating a fake website for “Rednax Pharmaceuticals” he narrowly escaped being found out by Sarah Horton-Cook (Linsey Godfrey), he’s not out of the woods yet. Xander is paying a huge emotional price himself after Ava unmasked him when he wouldn’t kill her and then drove off a cliff where she died in a fiery crash.

All the while, Xander has to draw suspicions away from himself, and so he’s made a show to Bonnie of wanting to bring Ava to justice. It’s not getting any easier when Justin Kiriakis (Wally Kurth) wants to help him and he can’t have Ava exposing him.

Xander can’t confide his Ava, Bonnie and Justin troubles to Sarah, so he keeps confiding in Gwen; even though their marriage didn’t happen they still have a bond. No one can understand a former pariah trying to keep their redemption up than another trying to do the same thing, he just has to keep their talking meetings from Sarah. She should understand, seeing she’s still friends with a couple of her former lovers, one being a baby daddy and the other being an ex-husband, keeping them at arm’s length. Sarah would have a point that perhaps Xander and Gwen’s friendship shouldn’t be that close, and Gwen understands that possibly better than Xander so they keep their meetings on the down-low. Except this one-she has an idea that might keep everyone safe from Ava and being considered vigilantes and she comes to the Kiriakis mansion to talk to Ned and Xander.

Days Of Our Lives Spoilers – Publish A Reward Offer

Jack Devereaux (Matthew Ashford) is still Xander’s friend, although he’s trying to keep him and Gwen from interacting very much because of the awkwardness. Gwen has to bring up Xander’s name, obviously, since Justin isn’t in a habit of talking to her and neither is Bonnie, for that matter. She relays that she ran into Xander and Justin had an idea for them to try to look for Ava, and that is a dangerous game!

She asks him about publishing a reward after saying she suggested it to Xander to pass on to Justin. Jack agrees that’s better, but suggests Rafe Hernandez’ (Galen Gering) input as well, and she goes to the Kiriakis mansion to suggest the idea to Xander and Justin, including Jack’s ideas.