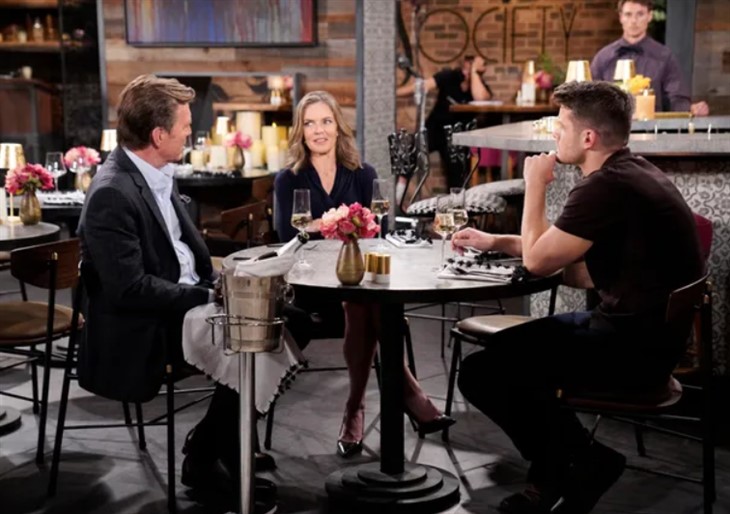 Diane is not wasting setting up shop in Genoa City. This week on Y&R she secured both a job at Marchetti working for her son Kyle Abbott (Michael Mealor) & a double date to celebrate at Society.

What could possibly be next for Diane on The Young & the Restless?

In the process of Diane attempting to convince her son, the Abbotts, & anyone else in Genoa City that she has changed, she made a feeble attempt to become gainfully employed.

Her son Kyle is much more than tolerating her. He’s welcomed her to stay in Genoa City. He’s now been footing her lodging at the GCAC after being kicked out of the Grand Phoenix… & Kyle is allowing her time with his son Harrison.

Y&R Spoilers – Kyle Abbott Got Diane Jenkins A Job… A Job At Marchetti. How convenient?

Regardless, time for an Abbott celebration. Kyle, Summer Newman (Allison Lanier), Diane, & Jack Abbott (Peter Bergman) enjoy a nice dinner at Society with only one interruption.

The Young & The Restless Spoilers – Phyllis Summers Calls A Truce With Diane Jenkins, Per Her Daughter’s Request

Summer Newman is vying for newcomer wife & mother of the year. Not only has she become instant-mom to Harrison Locke after marrying his bio-dad Kyle, but her mother-in-law is also back from the dead & back in Genoa City.

Phyllis Summers (Michelle Stafford) reluctantly agrees to call a truce with Diane Jenkins. Phyllis is only motivated to attempt a truce to support her daughter.

The truce put in place by Phyllis & Diane & instigated by Summer means that if Phyllis should happen to run into some type of family double date, she must be well-behaved.

How long before Phyllis gets tired of running into the evolving Abbott family in Genoa City & explodes?
Young & the Restless Spoilers: Diane Jenkins Nails Being Named Marchetti Public Relations Representative

Now that Jack has given up on Phyllis & is now tolerating Diane, Phyllis going off the deep end & maybe even needing treatment at Fairview is coming soon. Add in her daughter Summer being tolerant of Diane & Summer & Kyle working with Diane at Marchetti, & Phyllis’s demise is all but certain.

Spoilers suggest that even if Diane simply does an average job doing PR at Marchetti she will be receiving accolades throughout the Genoa City business community as the hotel proprietor of the Grand Phoenix spirals out of control.

Will the next demise of Phyllis Summers be temporary or long-term? Do you agree with Kyle, Summer, & Jack’s support & tolerance of Diane?… Or, do you think Diane Jenkins should have stayed dead?

Drop us a comment on our social media & don’t forget to check back here again soon for more Y&R scoop.