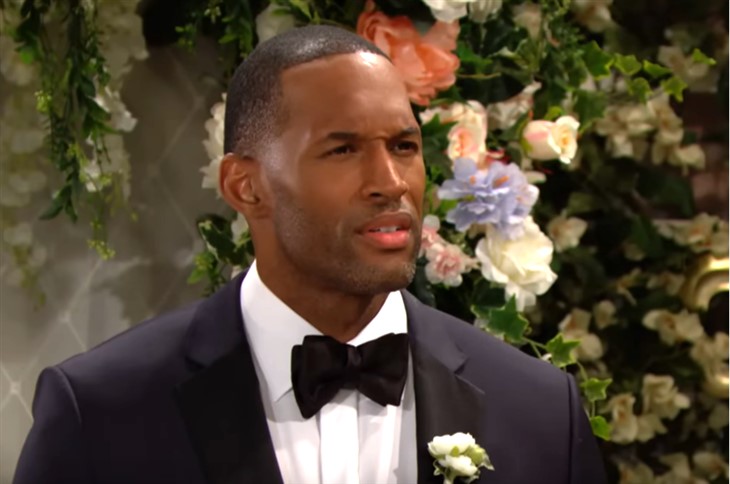 The Bold and the Beautiful (B&B) spoilers document that Carter Walton (Lawrence Saint-Victor) arrived, ready to marry Paris Buckingham (Diamond White). She was in contact with him multiple times on the big day, as her excitement was hard to contain.

Ridge Forrester (Thorsten Kaye) served as a form of Best Man, though he was not offering traditional support. Instead, Ridge continued to question Carter, asking him why he wanted to marry someone he did not love.

Carter’s answers were logical. He cared about Paris and thought she would make him a good wife and mother to his children. Yes, but what about Quinn Fuller (Rena Sofer)?

The big reveal, where Quinn and Bridget Forrester (Ashley Jones) caught Eric Forrester (John McCook) with Donna Logan (Jennifer Gareis) at the club, turned out to be less contentious than anticipated. Quinn was upset and let Eric have it. But all was resolved quickly.

Viewers recognized that Eric and Quinn were playing their last scene as husband and wife. Eric told Quinn everything was much easier with Donna and that he has fun with her.

Quinn felt that she could admit that her love was with Carter. With that, Eric encouraged her to stop the wedding.

B&B Spoilers – Paris Buckingham Can Not Convince Her Mother

Grace Buckingham (Cassandra Creech) told her younger daughter that opposing the marriage to Carter was not about Reese Buckingham (Wayne Brady). But Paris and the various members of the audience had to believe Grace’s instinct about Carter was partially based on what she endured with Reese.

Paris did not want to hear negativity about her choice. She was convinced that Carter’s pledge to her was real. Why else would he ask her to marry him if he did not love her?

But Paris was soon to learn that Carter had doubts, which established a juicy soapy conundrum.

The Bold And The Beautiful Spoilers – Carter Walton Can Avoid Mistake

Carter will need to reconsider his stance once he learns that Quinn and Eric are over. Why settle for Paris, which is what he is doing, if Quinn is available and Eric is encouraging his soon-to-be ex-wife and Carter to be together?

Carter will surely hurt Paris’ heart in the short term. But being honest with her is something she will appreciate in time.

A marriage to Paris could project through to disloyalty. Would Carter want to have children with Paris if he is not committed to her for life? No, in his heart Carter is an honest guy and must force himself to make the hard but the right choice. Quinn is the better match for him on B&B.