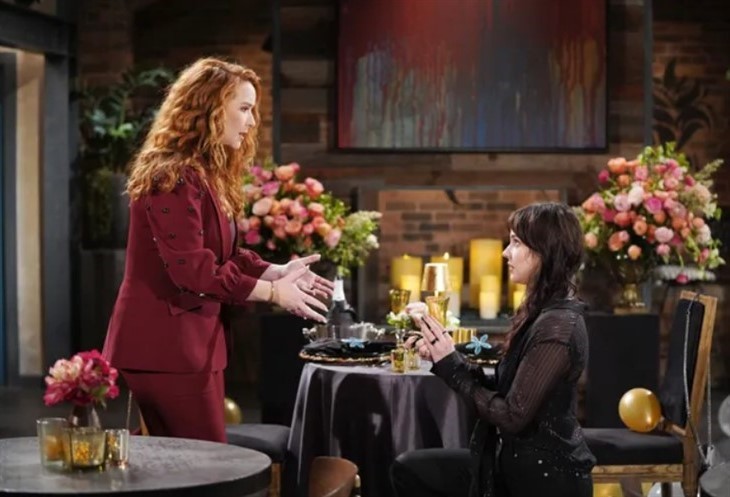 The Young and the Restless (Y&R) spoilers for Thursday, January 27, 2022, reveal Mariah turning the tables on Tessa in the romance department.

Tessa Porter (Cait Fairbanks) already surprised Mariah Copeland (Camryn Grimes) with a proposal at Society and Mariah said yes, prompting them to tell the news to family and friends, while disappointing Noah Newman (Rory Gibson) who still seems to have a thing for his sister’s girlfriend.

This week, Mariah decides that Tessa should know what it’s like to have someone ask them to marry you, so she does the same for Tessa that Tessa did for her. She sets up a shrine for their love with memories of their romance at Crimson Lights and delivers a heartfelt declaration of her feelings before proposing. It’s a treat for Teriah fans, but it’s not a treat for Noah.

All of this prompts Noah to make a confession about his feelings for Tessa, but who does he end up telling? Certainly, he doesn’t tell Tessa, right? Cause that would be extremely weird. Perhaps he confides in his father since he is working for Nick Newman (Joshua Morrow) now and the two have become close. Hopefully, Nick has some true words of wisdom for his son.

Y&R Spoilers – Chance Is Still Haunted By His Past

Now that Chance Chancellor (Conner Floyd) convinced Abby Newman (Melissa Ordway) to allow Devon Hamilton (Bryton James) legal visitation with Dominic, Abby feels like a lost soul and Chance finally feels he can bring without a baby he never bonded with getting in the way. It’s not that he doesn’t love the baby. It’s just that Abby’s build-a-baby experiment happened without him while he was focused on his mission.

And that mission is still on his mind. It was a traumatic year for him in which he nearly died and others he knew did die and he is still suffering from PTSD. Will Abby be able to give him the support he needs or will she continue to wallow in her own self-pity because her surrogacy plan didn’t work out as she envisioned? Stay tuned to The Young and the Restless weekdays to see how these stories play out.