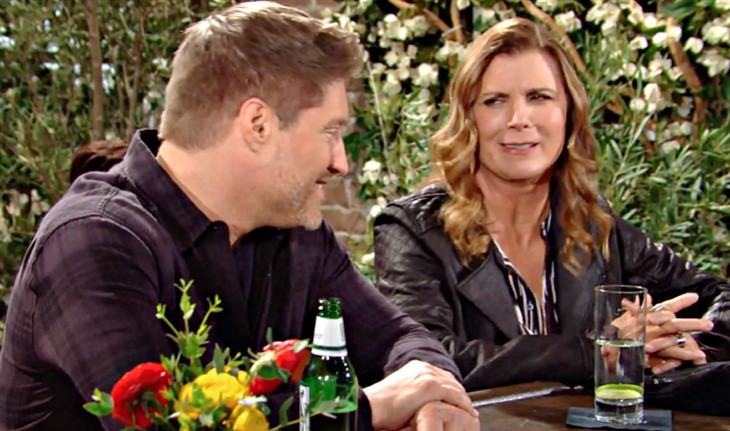 The Bold and the Beautiful (B&B) spoilers for Thursday, January 27, 2022, reveal Sheila determined to hurt Brooke in any way she can — and will use Deacon to do so.

The Bold And The Beautiful Spoilers – Sheila Wants Answers — NOW!

Although Sheila Carter (Kimberlin Brown) returned to the scene to bond with her long-lost son, Finn (Tanner Novlan), she seems to have forgotten all about him and perhaps, so has Steffy Forrester (Jacqueline MacInnes Wood) since we barely see her with her new husband. However, all Sheila really wants to do now is stick it to Brooke Logan Forrester (Katherine Kelly Lang) and ruin her life. And she is well on her way to doing that now that Douglas (Henry Joseph Samiri) has revealed Grandma’s big secret about kissing Santa Claus on New Year’s Eve.

And Sheila demands that Santa Claus — aka Deacon Sharpe (Sean Kanan) — tell her exactly what happened that night. Too bad Deacon doesn’t want to kiss and tell. Well, if Deacon is not forthcoming, Sheila will just have to make him fess up in her own unique and deranged way. Is Deacon in over his head with Sheila or will he be able to soon control her and get her to calm down?

Hope Logan Spencer (Annika Noelle) asked Douglas to keep what he saw between Grandma and Santa a secret (he didn’t because he cannot tell a lie), but she may secretly like what she heard. Liam Spencer (Scott Clifton) tries to get his wife to confess she really likes the idea of her parents kissing and growing close to one another.

She has wanted them to have some sort of relationship her entire life and is frankly tired of having Ridge Forrester (Thorsten Kaye) as a stepfather. She is finally getting to know Deacon and she likes him and wants him in her life as a father.

However, she doesn’t like seeing her mother as such a hot mess and knows that Brooke is terrified her ninth marriage to Ridge is about to come to an end. But perhaps that is the best thing for everyone and Brooke just doesn’t know it yet. Maybe Hope will have to help her mother come to terms with where she really wants to go in life — as long as Sheila Carter will allow it. Stay tuned to The Bold and the Beautiful weekdays to see how these stories play out.

Days Of Our Lives Spoilers: JoDevil Makes Gabi Think Jake Is A Love Cheat, Gets Her In Bed?