Y&R Spoilers: Jack Sets Boundaries For Diane, Which She Is Likely To Ignore 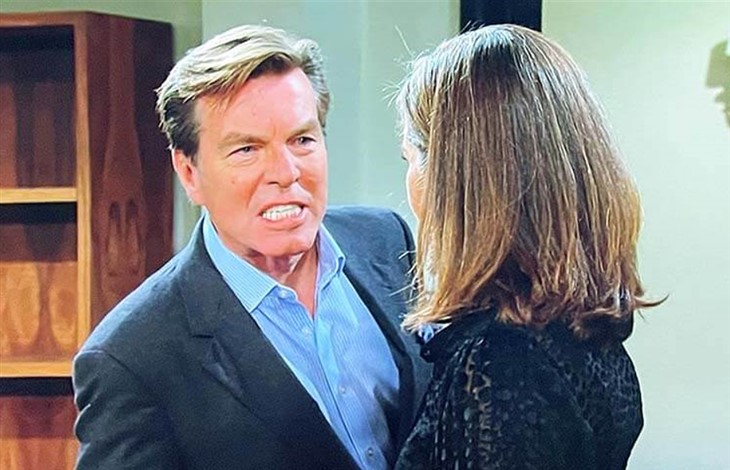 Viewers of The Young and The Restless will recall that Jack had already set a strict boundary concerning contact with their son Kyle Abbott (Michael Mealor) which Diane had roundly ignored, unbeknownst to Jack! Before Jack had even come back to Los Angeles with Phyllis Summers (Michelle Stafford) to set the boundary that Jack would give Kyle Diane’s contact information and leave the ball in Kyle’s court, Diane had impersonated Ashley Abbott (Eileen Davidson) and gotten his work contact information in Italy! Viewers of The Young and The Restless had seen that Jack had contacted Kyle, and he was coming to Genoa City and bringing Harrison Locke (Kellen Enriquez) although Summer Newman Abbott (Hunter King) wasn’t able to come because of work responsibilities. Now, Jack will set some more strict boundaries for Diane that she must follow when she comes to Genoa City to meet with Kyle and meet Harrison, one of which will likely be that the meeting will be in a public place with lots of witnesses!

Viewers of The Young and The Restless know that Jack doesn’t trust Diane, and Phyllis trusts her even less, and they may have some frank discussions on where Diane can stay while she’s in town! Neither Jack, Phyllis, or any of the Abbott family want her staying at the Abbott home, that is for sure, although Kyle and Harrison will, more than likely, but Phyllis may be hesitant to let her stay at the Grand Phoenix! However, viewers of The Young and The Restless can imagine that with the security system and cameras, The Grand Phoenix may be the safest place for Diane to stay, and Phyllis may grudgingly agree to it – with security informed to keep an eye on Diane at all times! That way if Diane tries anything sneaky or stupid – which Phyllis and Jack fully expect that she will – it’ll all be on camera and security advised to detain her!

Longtime viewers of The Young and The Restless will recall that Diane pretty much did just as she darned well pleased, and didn’t care what anyone thought or what anyone did or tried to do about it! When Phyllis confronted Diane in a recent episode of The Young and The Restless, she pretty much told Diane that she knew she hadn’t changed and she was still the same cray-cray schemer! If the meeting is to be public with plenty of witnesses so that Diane can be held accountable for her actions should she try something sneaky, viewers can bet that she’ll track down Kyle and Harrison on her own! No one would be a bit surprised to see her waiting for them at the airport dressed as an airport limo driver to take them to the Abbott house, so it would be best for Jack to meet them there and get one step ahead!

Jenna Duggar Moves On from ‘Counting On,’ Earns 6-Figure Payday

Days Of Our Lives Spoilers – Johnny Tries To Make Amends With Chanel!