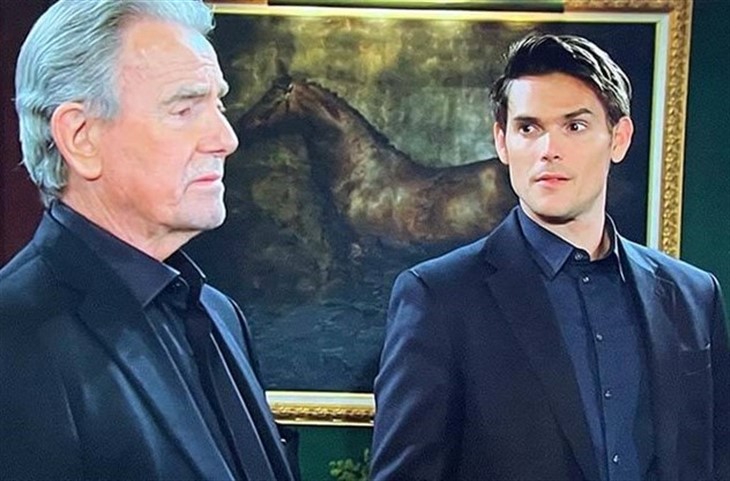 The Young and the Restless (Y&R) spoilers for Thursday, April 7, 2022, reveal Victor putting his foot down when he learns what Adam is up to.

The Young And The Restless Spoilers – Listen To Dad, Adam Newman

Adam Newman (Mark Grossman) was thrilled when he was given the CEO position at Newman-Locke after Victoria Newman Locke (Amelia Heinle) decided to go to Tuscany with Ashland Locke (Robert Newman) to help bring him down. Victor Newman (Eric Braeden) thwarted Ashland’s plans to escape on Wednesday and now he puts a stop to what Adam is doing.

He really wants to put his inexperienced girlfriend in charge of Newman Media. Is his son crazy? A woman who designs dresses and was caught stealing designs when she lived in Los Angeles because she couldn’t come up with anything on her own. This is what Adam thinks he should be doing. Well, not if The Great Victor Newman has anything to say about it.

Nick Newman (Joshua Morrow) both likes and doesn’t like knowing that he was right about Ashland Locke the whole time. The man was scamming his sister and his entire family and he was ostracized because he wouldn’t give up trying to prove it. He may have even lost Phyllis Summers (Michelle Stafford) because of that.

On Thursday, Nick and Victoria are back where they belong, with a united front, although nobody knows it yet. When push comes to shove, Victor and Nikki Neman’s (Melody Thomas Scott) children will always be there for one another no matter what happens. So, what assistance is Nick about to offer his sister and will it take these Newman siblings to finally bring this man down?

Chance Chancellor (Conner Floyd) has been having a very hard time since coming home from his mission in Spain and has been keeping a lot from his wife. He’s also been working very hard to heal and now he finally decides to open up to Abby Newman Chancellor (Melissa Ordway) about things he hasn’t wanted to talk about before. Is this a true step forward for Abby and Chance? Stay tuned to The Young and the Restless weekdays to see how these stories play out.