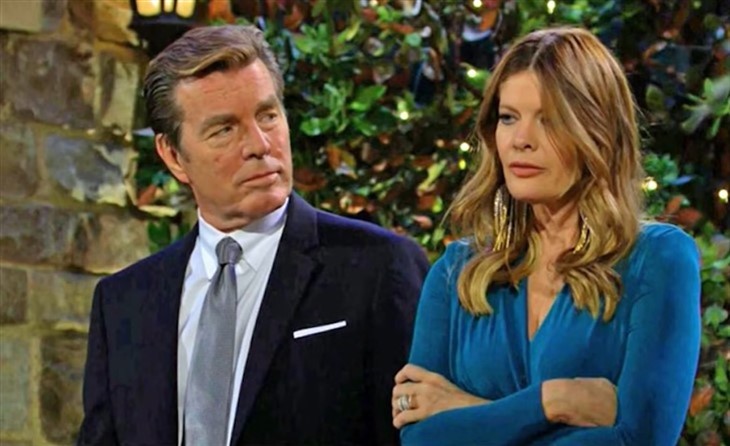 The Young and the Restless (Y&R) spoilers reveal that Jack Abbott (Peter Bergman) caught the bouquet at the “Teriah” wedding. Could Jack be the next to tie the knot? Jack might surprise Phyllis Summers (Michelle Stafford) by proposing marriage after their night of passion. Will Diane Jenkins (Susan Walters) allow the wedding to happen, though?

The Young And The Restless Spoilers – Catching ‘Teriah’ Bouquet

Y&R spoilers reveal that Tessa Porter (Cait Fairbanks) and Mariah Copeland (Camryn Grimes) tied the knot. When the couple threw the bouquet, it kept getting caught by those who were already married.

Finally, the third time was the charm. It wasn’t a single woman that caught the bouquet, but a man. When Jack grasped the bouquet, fans predicted it was a clue that he could be the next Genoa City resident to get married.

Jack confessed his love for Phyllis a while ago. However, Phyllis was with Nick Newman (Joshua Morrow) at the time. Even though Phyllis and Nick broke up, Jack didn’t get to rekindle his relationship with “Red.” Phyllis was worried that she would just end up hurting Jack. After all, Phyllis does have a history and pattern of doing that.

However, things changed after the “Teriah” wedding. Phyllis planted a passionate kiss on Jack’s lips. Then, the two went into the bedroom to engage in passion.

The Young And The Restless Spoilers – Proposing To Phyllis Summers

The Young and the Restless spoilers reveal that Jack was hit hard by Keemo Abbott’s (formerly played by Philip Moon) death. Jack realizes how fast life can pass one by. Jack also knows that tomorrow isn’t guaranteed.

So, that might factor into Jack’s decision regarding Phyllis. Jack and Phyllis know each other so well that dating might be unnecessary. At least, that might be what Jack is thinking. Could Jack surprise Phyllis by proposing right after they get back together?

If Jack proposes, expect Phyllis to quickly accept. However, we must wonder if she would really accept this fast if Diane weren’t in Genoa City. There is no question that Phyllis loves Jack, but she wanted to be cautious about the relationship.

Since Diane has been back in town, Phyllis seems to be pressing fast-forward on the romance. So, we have to wonder if Phyllis says yes because Jack’s her soulmate, or if it’s just to rub it in Diane’s face.

In either case, expect Diane to cause some chaos. In fact, Diane might put a plan in motion that could jeopardize the future of “Phack.” We will have to keep watching to see what happens next with these characters.