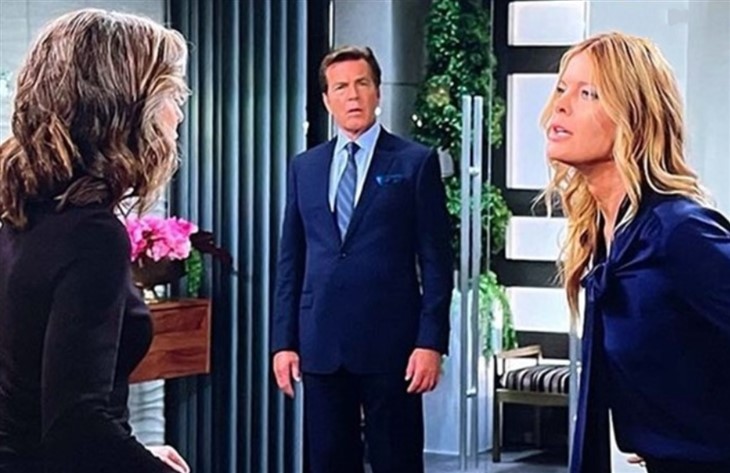 The Young and the Restless spoilers reveal that Phyllis Summers (Michelle Stafford) agrees to a truce. However, this fake truce is just so Phyllis can get Jack Abbott (Peter Bergman) back. When Jack refuses, Phyllis dons a disguise and spies on Diane Jenkins (Susan Walters). If Jack catches Phyllis in the act, could she completely unravel and get violent?

The Young And The Restless Spoilers – Phyllis Summers’ Fake Truce

Y&R spoilers reveal that Phyllis comes back to town and tells Summer a lie. Phyllis claims that she wants to move on from the past and is tired of being so fixated on Diane. Summer doesn’t quite believe what she is hearing, so she tells her mother to prove it. Summer suggests that Phyllis prove that she’s moving on by extending an olive branch to Diane.

Phyllis will return to Genoa City and make up a story to Summer. Now, Summer has already told Amanda Sinclair (Mishael Morgan) and Lauren Fenmore Baldwin (Tracey E. Bregman) how concerned she is about Phyllis. Summer is determined to play peacekeeper even though Lauren told her it’s a lost cause.

Phyllis will tell Summer that she’s ready to leave the past in the past. However, Summer doesn’t believe it and wants Phyllis to prove it by meeting with Diane. Phyllis agrees to a truce, which makes Diane elated. In fact, Diane can’t wait to share this new development with Jack.

The Young And The Restless Spoilers- Spying On Diane Jenkins

The Young and the Restless spoilers reveal that Jack is doubtful that Phyllis would agree to a truce. Then, Phyllis asks Jack to meet her. Jack hesitates and reluctantly agrees but tells Phyllis she only has five minutes. So, it’s clear that Jack has a lot of hatred and hurt concerning Phyllis.

Phyllis is hoping that the truce with Diane will repair her relationship with Jack. After all, the whole reason why Jack dumped her was because of her outburst with Diane. However, it seems that Jack is over Phyllis and is slowly becoming Team Diane.

This causes Phyllis to take another step in her scheme. While pretending to be over her beef with Diane, Phyllis puts on a disguise and spies on the resurrected Genoa City resident.

Fans remember how Phyllis spiraled so out of control over Diane that Jack was horrified. Jack tried to explain his reasons for not interfering in Diane and Kyle Abbott’s (Michael Mealor) relationship. However, Phyllis exploded, and Jack was taken aback. In fact, Bergman told Soap Opera Digest that Phyllis is turning into someone Jack doesn’t even recognize.

If Jack catches Phyllis spying on Diane in a disguise, this will only make their rift worse. Jack could put Phyllis on blast, which might send her completely over the edge. In her fit of rage, could Phyllis accidentally hit or shove Jack?