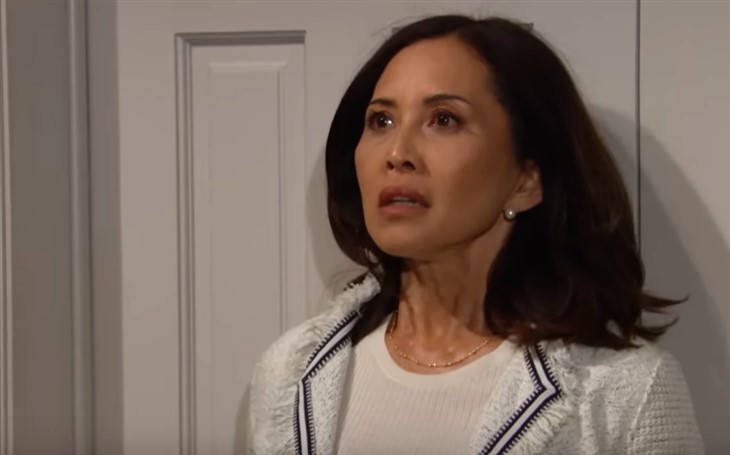 The Bold and the Beautiful spoilers reveal that Li Finnegan (Naomi Matsuda) tried to call for help. However, Sheila Carter (Kimberlin Brown) caught her. There is a moment when Li manages to get free and runs for her life. However, Li never shows up and neither do the police. Sheila is forced to keep John “Finn” Finnegan (Tanner Novlan) alive on her own.

Li managed to persuade Sheila that she needed to go to the hospital pharmacy to get medication for Finn. Sheila wasn’t sure but went ahead and let Li go. Instead of waiting until she was out of sight, Li called the police right outside the door. That was when Sheila opened the door and caught Li on the phone.

It is teased that Li makes a run for it. So, Sheila must get distracted so Li can find a few seconds to escape. Maybe someone was walking toward them, or Li’s phone might have rung. Perhaps the machines Finn is hooked up to started beeping. In any case, Li escapes and Sheila probably worries that the police are on their way.

Actress Kimberlin Brown talked to Soap Opera Digest about what Sheila does next. All of a sudden, Sheila has to keep Finn alive. Sheila used to be a nurse but it was a long time ago.

“After Li takes off, Sheila is left to take care of her own son, so right now, Sheila is just praying that he wakes up… She hasn’t been a nurse in so many years, but when there’s a will, there’s a way.”

It is teased that Mike Guthrie (Ken Hanes) will reappear to help Sheila in her time of need. What happened to Li and how will Finn react when he finally wakes up?