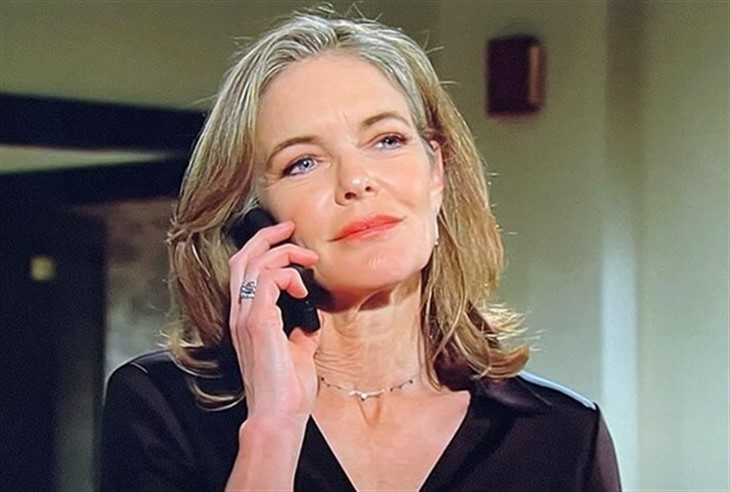 The Young and the Restless spoilers reveal that Diane Jenkins (Susan Walters) is slowly being accepted by more characters. As people soften toward Diane and she gains supporters, Phyllis Summers (Michelle Stafford) is headed in the other direction. Phyllis is now lying to her own daughter and running around in disguises. Will there be a shocking role reversal?

The Young And The Restless Spoilers – Diane Jenkins’ Resurrection

Y&R spoilers reveal that Diane decided to come out of hiding and show everyone she was alive. Of course, Diane didn’t do this by coming back to Genoa City on her own. Diane played games by sending mysterious text messages to Jack Abbott (Peter Bergman).

Eventually, Jack learned that Keemo Abbott (formerly played by Philip Moon) passed away. Then, Jack discovered Keemo left behind a daughter, Allie Nguyen (Kelsey Wang). It was quite a shocking moment when Jack and Diane faced each other after all those years.

Ever since Diane returned to Genoa City, she has made waves. Diane is supposed to be dead. Plus, everyone remembers all the chaos she caused. It’s difficult for people to forget about the things she did, especially since Nikki Newman (Melody Thomas Scott) nearly went to prison for Diane’s murder.

Even though Jack still doesn’t trust Diane, he is softening toward her. Jack has also made a complete 180 regarding Phyllis. Jack feels manipulated and used by Phyllis. Even though Phyllis’ feelings are genuine, Jack isn’t being very forgiving.

Meanwhile, Diane is saying and doing all the right things. Jack is beginning to consider the possibility that Diane might really be a changed woman.

The Young And The Restless Spoilers – More Supporters Emerge

The Young and the Restless spoilers reveal that Diane is gaining supporters. Kyle Abbott (Michael Mealor) seems to be getting much closer to his mother. Summer Newman-Abbott (Allison Lanier) is still being cautious. Although Summer doesn’t think that Diane is evil, she does believe the woman intentionally damaged Jack and Phyllis’ relationship.

Then there is Michael Baldwin (Christian LeBlanc). Nikki tried to recruit Michael for a Diane elimination project. However, Michael refused and really believes that people should give Diane a chance.

As time goes on, it seems that Diane might gain even more supporters. After all, from the outside, Diane seems stable and sane while Phyllis is acting crazy.

Phyllis is getting even more desperate to get rid of Diane. Phyllis is even lying to Summer and as fans know, the mother and daughter used to be so close. Phyllis insists that Diane needs to be taught a lesson. Now Phyllis is sneaking around Genoa City in a disguise so she can spy on Jack and Diane.

As Phyllis gets even more desperate, she will take extreme measures to get rid of her rival. However, Phyllis might go way too far, and her actions could shock even the most diehard Diane haters. Could Phyllis become Genoa City’s new pariah while Diane turns into the model citizen?

B&B Spoilers: Who Does Carter Marry – Paris Or Quinn?