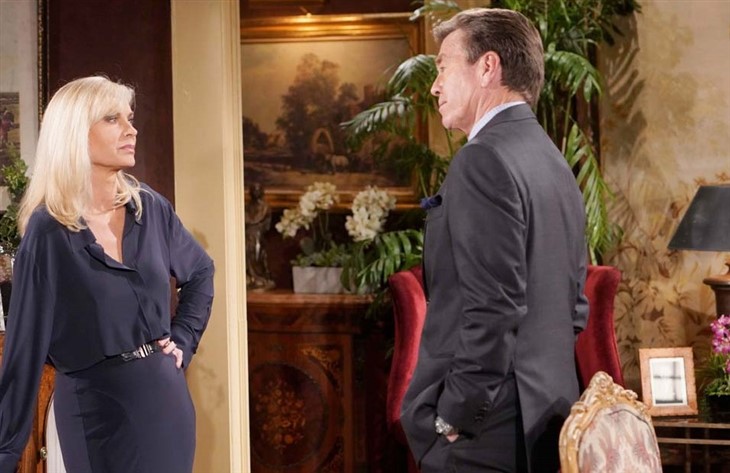 The Young and the Restless spoilers document that Jack Abbott (Peter Bergman) and Ashley Abbott (Eileen Davidson) believe the other person is wrong. But actually, the Abbott siblings are both right.

Tucker McCall (Trevor St. John) is plotting to take over Jabot. He is still slithering through the fields in Genoa City, Wisconsin. Ashley has convinced herself that she has a grip on this man, and she does not.

Diane Jenkins (Susan Walters) has returned from the dead and revived her old ways. She uses emotional ploys to prey on Jack’s vulnerability and good nature. Like his sister, Jack does not see that Diane has injected trouble into the family and is not the poor soul she makes herself out to be.

The Young And The Restless Spoilers – Tucker McCall Is Arrogant

Y&R spoilers indicate Tucker believes that Ashley is overwhelmed by his presence. She still appears to find him physically attractive.

However, Ashley is also able to separate feelings from logic. She does not trust Tucker and is attempting to get as much information from him as humanly possible to aid her attempt to run Diane out of town.

While Ashley is suspicious of her last husband’s intentions, she continues to meet with him. That serves his ends, as St. John’s character wants to seize Jabot and then offer it as a gift to Ashley by having her head it.

Diane has withheld so much information that Jack can not know what she continues to shield. He recently learned about Jeremy Stark (James Hyde), who Diane believes could become a direct threat to Kyle Abbott (Michael Mealor) and Harrison Locke (Kellen Enriquez).

But Diane routinely works on Jack’s heart. She plays off all of her actions as some form of confusion and pressured responses. In her world, she is the perpetual, misunderstood victim.

Diane warned Ashley and her cohorts not to contact Jeremy. Davidson’s character found that threat to be curious and confirming, as Diane can play hardball no matter how many wounds she claims to have endured.

Audra Charles (Zuleyka Silver) is Tucker’s mole inside Chancellor-Winters. He has not revealed that point to Ashley.

Silver’s character could expose Tucker’s claimed devotion to Ashley by telling her that he tried to hit on her in the suite at the Grand Phoenix Hotel. What reasonable explanation could Tucker offer the woman he wants to remarry, and how will he explain the Jabot takeover attempt when he employs that effort?

Diane says that she wants to protect Kyle, Harrison, Jack, and Summer. No mention of Ashley or Traci Abbott (Beth Maitland) was offered, which Jack seemingly did not realize.

Jack and Ashley are turning on each other. They are allowing themselves to be split by Tucker and Diane, with no easy solution ahead on Y&R.