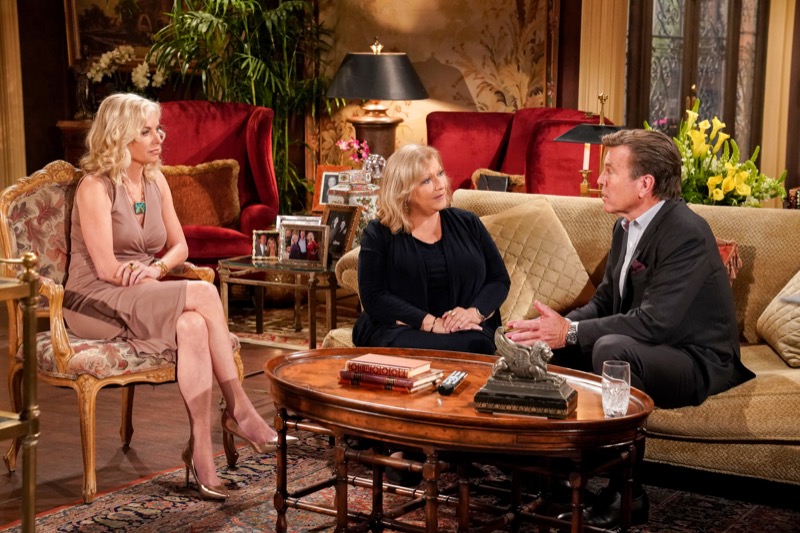 The Young and The Restless (Y&R) spoilers and updates tease there could be an Abbott family feud brewing in upcoming Y & R episodes! It seems that Ashley Abbott (Eileen Davidson) will do something that angers Jack Abbott (Peter Bergman) and Traci Abbott (Beth Maitland) might be in the middle trying to intervene!

The Young And The Restless Spoilers: Ashley Abbott Blindsides Jack Abbott With Her Actions

Ashley will blindside Jack with her actions, and Traci could very well be pulled into the situation as well, trying to make peace and not wanting to take sides. One thing that Ashley could do that could trigger rage in Jack would be if she were to do something unfair regarding his granddaughter Allie Nguyen (Kelsey Wang). Allie has just gotten hired at the Jabot laboratory, following in the footsteps of her late father Keemo Volien Abbott aka Hao Nguyen ll (Phillip Moon).

Even though Ashley has become quite fond of Allie, there is a reason why many workplaces do not hire relatives; that is because mistakes can be made and objectivity lost. Ashley may routinely deliver scathingly bad reviews to those under her supervision if they mess up, but Allie could take it personally, which will bring Ashley under fire from Jack!

During the week of July 18, Jack will discover something major, and it won’t be a good thing; it will really set Jack off! There is a possibility that Ashley could do or say something offensive concerning Diane Jenkins (Susan Walters), but Jack hasn’t gotten close enough to her to warrant his rage. More than likely, this is going to be about Allie, and that would make sense for Traci to get pulled into the situation as well, more than something about Diane. If Ashley does hurt Allie’s feelings at work unintentionally or she really is too hard on her, both Jack and Traci would be upset! There’s a possibility that Ashley may draw an unfair comparison between Allie’s and Keemo’s work at the same age and that would hit a sore spot in Allie.

The Young And The Restless Spoilers: Both Jack And Traci Abbott Want To Keep Allie Nguyen Close

There’s no doubt that both Jack and Traci want to keep Allie close, and Jack wants her to stay in Genoa City; even if Traci comes and goes.  Both Jack and Traci would be upset if Ashley were to come down on Allie hard enough to scare her back to Los Angeles! For Jack, it would even be more difficult since he never resolved things between himself and Keemo, and subconsciously he has to be thinking helping Allie makes up.

That is probably one reason that Jack is allowing for Diane to have a chance to make up for lost time with Kyle, once he saw Kyle had allowed it. As for Traci, it is very obvious that she has motherly feelings towards Allie – perhaps thinking about her lost time with her own late daughter Colleen Carlton (Tammin Sursok).

Y & R Spoilers: If Ashley Abbott Does Come On Too Strong And Upset Allie Nguyen She Doesn’t Mean To

There’s a good chance if Ashley does come on too strong at the Jabot lab and upset Allie, she certainly doesn’t mean to. It may simply be a matter of a personality clash, and the two of them taking the other the wrong way. Allie seems to be more of a sensitive soul like Traci and Jack, whereas Ashley can be rather cynical and stern. Those two opposite personality types often do not understand each other, and have to work extra hard at their relationships. However this comes about, however, Jack will jump to Allie’s defense, and so will Traci, clashing with Ashley in the process!

GH Spoilers: Why Do Female Characters Get The Least Love On ABC Show?