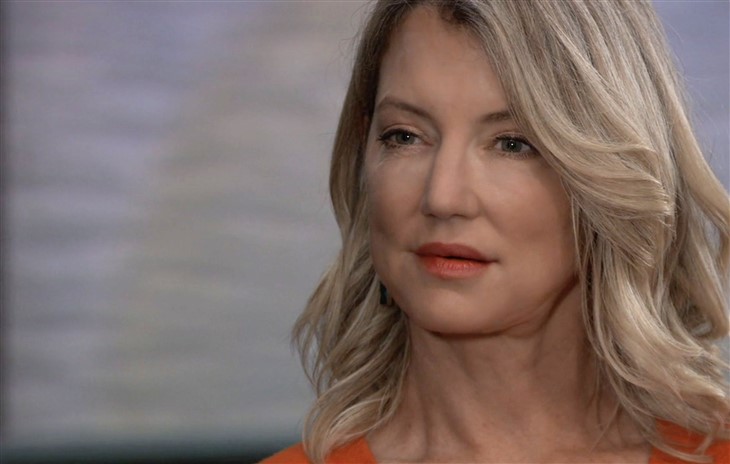 General Hospital spoilers reveals Nina Reeves (Cynthia Watros) is looking for family ties this holiday season, but she’s barking up the wrong tree as she attempts to cement her place in Sonny Corinthos’ (Maurice Benard) life. Sonny has alienated many of the people who love him. In the past, Jason Morgan (Steve Burton) would have stood by his side no matter what, and he would have respected Nina because Sonny chose to be with her.

But Jason isn’t here, is he? Sonny may have found Dex Heller (Evan Hofer) to replace Jason’s role in the business, but he hasn’t found anyone to replace his role as his best friend. Likewise, Carly Spencer’s (Laura Wright) role as his other best friend has been vacant for some time. Sonny doesn’t have many people in his corner, least of all his family. Is Nina thinking she can butter them up and bring them back on board?

We don’t have the details just yet of how Nina and Josslyn ‘Joss’ Jacks (Eden McCoy) are going to come together, but it’s apparent the stage will be set for them to be nudged in one another’s direction. Nina is going to decide to make the best of it and work to befriend Joss. Maybe she will find a way to score a few brownie points with her, but Joss won’t forget what Nina did to her family so easily.

General Hospital spoilers show when Nina kept the truth about Sonny being alive and well in Nixon Falls a secret from everyone who loved him, a big part of her did it just to stick it to Carly. When she and “Mike” came back from Nixon Falls to Port Charles, she didn’t go to great lengths to avoid flaunting that control in Carly’s face.

When the truth came out that Sonny was involved with Nina, she also relished knowing it had to drive Carly crazy. So there’s no reason for us to suspect Nina isn’t enjoying every bit of trying to forge a friendship with Joss and hoping it infuriates Carly.

According to GH spoilers, Nina might think she and Carly are really at war now since Carly told her to bring her A-game. She knows Carly wouldn’t stop and think twice before hurting Nina on purpose just to stick it to her if she could. Little does Nina know, Carly is doing that right now by withholding the truth about Willow Tait (Katelyn McMullen) being Nina’s daughter. Will this end up being a war of the mothers using their daughters as weaponry? Let’s hope not! Stay tuned for more GH news and spoilers to find out though!