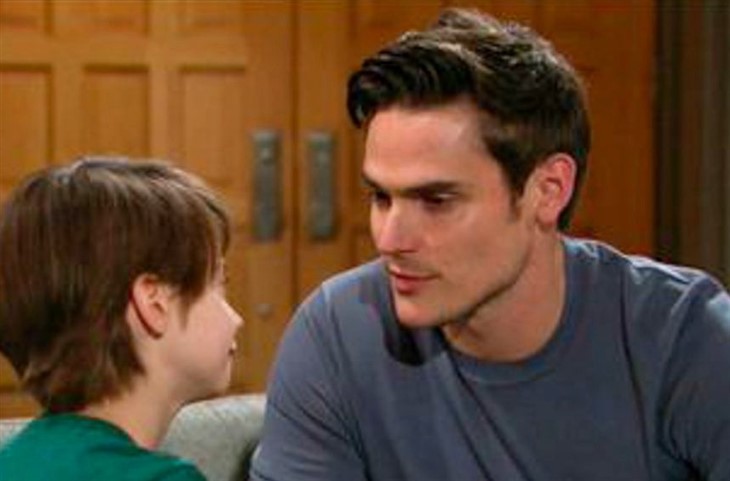 The Young and The Restless spoilers and rumors tease that Connor Newman (Judah Mackey) might be turning into a little Adam Newman (Mark Grossman).  He certainly seemed to display Adam’s personality and reactions when his mother told him Johnny Abbott (Paxton Mishkind) was his half-brother.

The Young And The Restless Spoilers – Copping An Attitude

One major thing that would remind a person of Adam was Connor’s copping an attitude with his mother, which in that case wasn’t surprising. Chelsea Lawson (Melissa Claire Egan) has been emotionally dependent on her son, which isn’t something that a ten year old boy should have to handle. She acts like she’s trying to replace the lack of a man and a job with her son, and trying to horn in on Johnny as well.

Billy Abbott, (Jason Thompson) Johnny’s father, and his adoptive mother Victoria Newman (Amelia Heinle) put the kibosh on Chelsea interacting with Johnny at all. Now both boys are left with anger and confusion finding out they are both brothers and cousins.

There are other things happening besides Connor’s snarky attitude with his mother that could wind up in him becoming a version of his father when he gets older. So far, he hasn’t killed anyone like Adam did as a teenager, but he has had some traumatic incidents. He was very attached to Rey Rosales (Jordi Vilasuso) when he died, and Chelsea was hospitalized for an extended length of time.

According to The Young and the Restless spoilers, Connor didn’t respond well when Adam and Chelsea broke up either, although he apparently enjoyed getting to know and spend time with his grandmother, Anita Lawson (Catherine Bach). However, childhood trauma like he’s endured can make for insecure and controlling adults who fail in close relationships.

The Young And The Restless Spoilers – He Can’t Share Attention

Even when Connor was little he couldn’t share attention, and he was manipulative. When Chelsea was with Nick Newman (Joshua Morrow) he couldn’t share her attention with his other half-brother Christian Newman (Alex Wilson). He bullied him and even locked him in a dark garage one night and using those tactics manipulated his mother into reuniting with his father. Adam seems to have a similar problem not being able to share attention with his father Victor Newman; (Eric Braeden) feeling rejection if Victor does anything for his half-siblings.

No wonder Connor had such a bad reaction to finding out Johnny was his half-brother in addition to being his cousin. He is worried about sharing his mother’s attention with someone else.