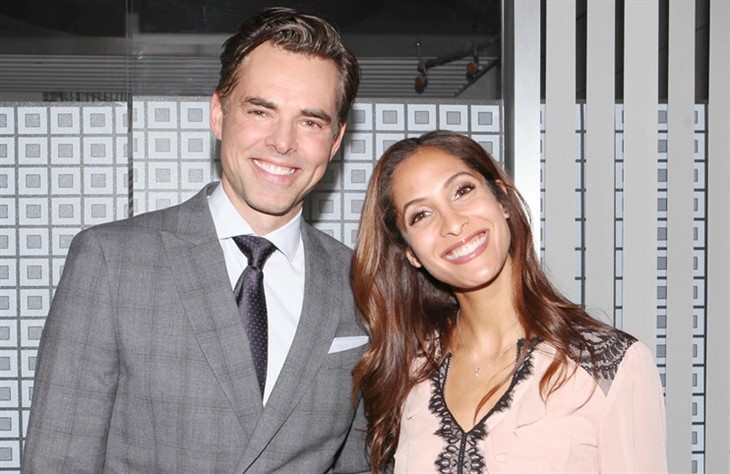 In the most recent edition of Soap Opera Digest, Jason and Christel were asked what they thought of the re-pairing of the former couple on The Young and The Restless. Billy and Lily had worked at “Brash and Sassy”, they really didn’t see each other that much. Lily was still with Cane Ashby (Daniel Goddard), while Billy was kind of everywhere and with everyone until he finally settled down with Victoria Newman (Amelia Heinle).

Christel was really excited about the prospect of a Billy-Lily pairing, having been with Daniel Goddard for thirteen years as they portrayed Lily and Cane. She had heard good things about Jason as an actor, and looked forward to working with him. As for Jason, he remarked even during the “Brash and Sassy” days of The Young and The Restless, he and Christel kind of just met coming and going.

The Young and The Restless’ Christel was definitely excited about Lily getting a new romantic storyline with a new partner after so many years with Goddard as Cane. When she found out that she and Billy would be running a company together she thought that was an interesting dynamic, since she had never played business partners become lovers, at least not pairing Lily with Billy! As for Jason, he liked seeing Billy move on from Victoria, even though she will always be in their life because of their children.

Jason thinks that this storyline will mature Billy a little bit, and he will have a chance to really come into his own. Viewers of The Young and The Restless will recall that time period when he was trying to figure out who he was, what made him tick, and what he really wanted out of life. Jason feels Billy had a sense of freedom but also a sense of self-worth for the first time when he and Victoria broke up. Jason also remarked it has been interesting to see how Lily brought out new sides of Billy, as well as Billy bringing out new sides of her.

Viewers of The Young and The Restless will recall when Billy and Lily started at ChancComm they were equal partners and started on an even playing field. Billy’s mother, Jill Abbott (Jess Walton) had planned it that way, remarking that she thought the two would balance each other out. Jason thought that was a good move – putting Billy and Lily in a position where Lily could keep Billy in check, but yet he has enough freedom to not be someone other than who he is! She’ll call him on it if he makes a bad decision or is ready to.

Christel says the way they are written gives them a great environment for the two to get to know each other and let the sparks fly as well. It can be a little complicated, but that really does well in the soap opera genre according to Christel.

Soap Opera Digest also asked Jason and Christel if they knew each other when this storyline started, and she said he barely knew him. She had seen him around, knew he was a good actor, and thought of him as a cool guy who drove an old truck, like a hipster! Jason verified they also hadn’t known each other that well. They were asked what they thought about working together on The Young and The Restless, and establishing their own rhythm.

Jason teased Christel, telling her not to botch it up! Christel told him not to worry, and then mentioned Jess Walton. Christel went on to say how their first scenes were with Jess as Jill, and it started as a work dynamic but neither knew how soon the storyline would shift to romance.

Longtime viewers of The Young and The Restless know Jess has been with the show as Jill for years, and Thompson loves her. He says she’s fantastic to work with and remembers her always nagging Victoria when Billy was with her, but feels she’s really happy about Billy and Lily being together. Christel, of course having played Lily Winters since her teenage years knows Jess a lot better.

The Young And The Restless Spoilers – Was There Anything Different Than Expected?

Both Jason and Christel acknowledged to Soap Opera Digest that there wasn’t really anything different than they expected in their new pairing on The Young and The Restless. They both kidded around and teased each other, which makes for good screen chemistry. Christel remarked that Jason wasn’t as boring as she thought he would be, although he figured she was bored as he thought she would be! He laughed at the thought of coming across as boring, and thought that interesting. He was surprised that she was funny at times and thought it endearing.

The two continued to kid around with each other during the interview. Then they were asked about the challenges of acting romantic in a socially distanced pandemic period, and Jason acknowledged it was a weird time! They’ve been able to make it work, although there were actually only three kisses and they were pretty spread apart. Jason was excited when the time came on The Young and The Restless for Lily and Billy to move in together, and things seemed a little more normal and realistic.

Y&R Spoilers – What About Their Fans?

Then Soap Opera Digest asked them about the fans, and noted that the Billy/Victoria and Cane/Lily pairings had very strong fan bases. They were asked if they were worried at all about fan reactions to the new pairing. Neither were excessively worried, and Christel said she’d learned in her years on The Young and The Restless not to worry about things like that. Jason felt somewhat of a sense of responsibility to fans, but more to make sure to do whatever he could to make the new pairing work. He puts a lot of value in making any storylines he is in on The Young and The Restless work, whether they be friendly character relationships or adversarial ones. Chemistry can work in either positive or negative ways, and actors need to learn to harness it – if you try to please everyone you’re in a tough spot.