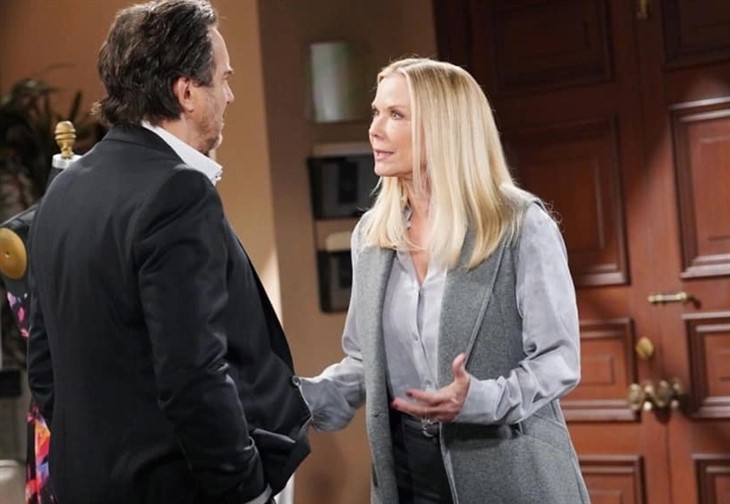 The Bold and The Beautiful spoilers and updates tease that Brooke Logan Forrester (Katherine Kelly Lang) will head for Aspen, determined to fight for Ridge Forrester (Thorsten Kaye). Ridge headed to Aspen to fight for Taylor Hayes (Krista Allen) to reunite with him, realizing his “destiny” may be Taylor, as his children have told him, not Brooke.

The Bold And The Beautiful Spoilers – Unfairly Accused

Brooke feels unfairly accused of lying to Ridge about not placing the call to Child Protective Services when Thomas Forrester (Matthew Atkinson) used a knife around Douglas Forrester (Django Ferri). Brooke had previously threatened to call if Douglas was in danger, and she definitely felt that not only Douglas but she was in danger, deeming Thomas unstable. Even her own daughter Hope Logan Spencer (Annika Noelle) seems to be duped by Thomas now, believing he has changed when clearly he has not.

Brooke will never believe Thomas is not dangerous or that he is stable, regardless of what Ridge or anyone else believes. And now that she has been given information that Ridge is chasing after Taylor in Aspen, she must fly to Aspen to rescue him from Taylor, and fight her.

B & B Spoilers – Rescued From Shauna Fulton

Brooke did exactly the same thing when she became aware that Shauna Fulton (Denise Richards) had gotten Ridge drunk and lured him to Las Vegas. As far as she was concerned, Shauna had kidnapped him because when someone’s drunk they cannot consent, and she flew there and found him and rescued him.

Now she must rescue him from Taylor, who she is sure set up this false narrative that she called CPS, and if she didn’t then Thomas must have. Calling CPS on himself and using a voice changing app to spoof both her voice and her phone number makes perfect sense to Brooke. Brooke “knows” Thomas doesn’t have enough sense to know it could have backfired and Douglas could have been taken from him right then and there.

The Bold And The Beautiful Spoilers – Ridge Forrester Angry

Instead of rescuing Ridge and bringing him back home, Brooke is shocked to find him angry that she came to Aspen after him. No amount of persuasion will change his mind, although it looks like his plan to reconcile with Taylor backfired too. Steffy Forrester Finnegan (Jacqueline Macinnes Wood) tries to intervene between Brooke, Taylor and Ridge with Brooke telling them to leave, it’s between her and her husband.

Brooke, however is shocked when Ridge tells HER to go back to Los Angeles because this is between him and Taylor! Brooke, of course, is livid, and she will not allow Ridge to make his own choice, which to her is obvious..he is HER husband.