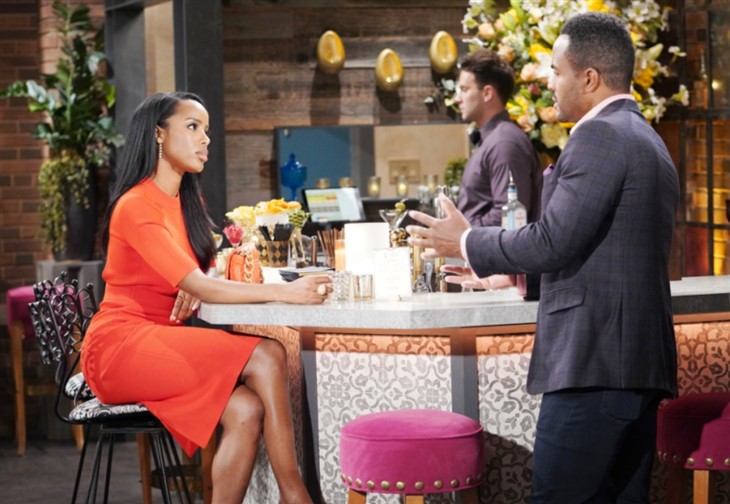 The Young and the Restless (Y&R) spoilers tease that Imani Benedict (Leigh-Ann Rose) has the hots for ex-doc/new businessman Nate Hastings (Sean Dominic). There really is no other way to put it, she is like a she-devil when around him. He is not displeased with her, but then there is his official girlfriend Elena Dawson (Brytni Sarpy). Elena is about to leave town for a work function and this move screams INFIDELITY on Nate’s part. Nate Dogg is no stranger to cheating, as that is how he hooked up with Elena in the first place. Question: Should Elena be worried? Answer: Is Hawaii all about leis?

The Young And The Restless spoilers – Nate Hastings Is Tempted

Imani has been kept in line by her proper acting sister Amanda Sinclair (Mishael Morgan). But lo and behold Amanda is also leaving Genoa City, Wisconsin following their mother’s stroke. Which means that Nate and Imani’s watch dogs will be off guard duty meaning that the mice could play while the felines are away.

Explosive show spoilers reveal that snoopy Imani overhears Elena talking about her trip to Hawaii to speak at a medical convention. She invited Nate but he is not comfortable leaving his new business venture so soon after the merger launch.

Imani is sneaky and not very subtle. She has broadcast her intentions toward Nate since the first time they met. And Nate, being a man, never seems very bothered by her attentions and ministrations. Don’t be surprised if Imani finds a work-related excuse to visit Nate at home. She was the one egging him on to spill the goods during his merger launch speech, while the others were against it. Nate sees an ally in Imani and maybe more!
Imani has made sure to tell Nate how she has his brilliant back and the compliments have gone to his head a bit. It’s perfectly reasonable to assume that Imani finds alone time with Nate and lubricates the situation with plenty of adult beverages.

The Young And The Restless Spoilers – Will Nate Hastings And Imani Benedict Be Busted?

The Young and the Restless Spoilers reveal that Nate’s kin and competitor Devon Hamilton (Bryton James) could rile him up beforehand, making him all the more susceptible to Imani’s charms. On top of that, work has kept Nate and Elena from spending time together and surely he will enjoy the company of lovely Imani if it comes to that.

Will he enjoy a little something more than flirty chit chat? Maybe definitely! What are the chances that someone catches these two in the act? Very good seeing as how Imani is as low key as a tidal wave and Devon has been keeping a close eye on Nate. Is that blackmail we smell on the horizon?