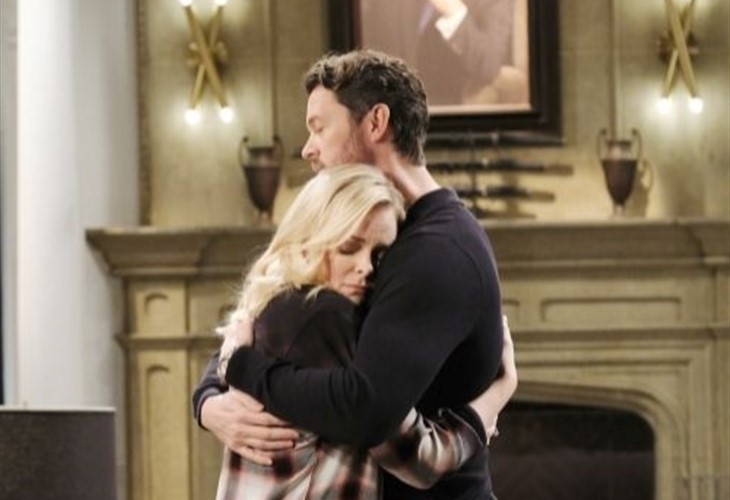 Days of Our Lives spoilers reveal Sami giving EJ quite a surprise, but she doesn’t seem to figure out what is going on with her husband… yet.

Days Of Our Lives Spoilers – Sami Brady Wants A Divorce

After Lucas Horton (Bryan R. Dattilo) proposes (but doesn’t confess), Sami Brady (Allison Sweeney) realizes there is a hitch in their plans. She is still married to EJ DiMera (Daniel Feuerriegel) and must take care of that problem now. That prompts her to march into the DiMera mansion with divorce papers for EJ to sign. And, of course, she gets there just as EJ and Belle Black Brady (Martha Madison) are about to make love for the first time.

Since Sami is as self-absorbed as ever on Days of Our Lives, it doesn’t even faze her when she sees her sister with her husband. Instead, she tells him of her intention to marry Lucas and EJ is stunned. He knows in his gut that Lucas is the one who had Sami kidnapped, but has yet to find the evidence to prove it. The fact that Sami wants to marry this man, who has been his enemy for years on end, is heartbreaking to EJ but he has to do what he has to do. Sami wants a divorce, so a divorce she will get.

After his confrontation with Sami, EJ remembers that Belle is there and he is determined to shut off his feelings for Sami and get back to the moment he was in with Belle before his wife so rudely interrupted. He has genuine feelings for Belle, despite having all these lingering and conflicting feelings for her neurotic and scheming big sister.

“The fact is they bother can go, ‘Well, yeah, we had kind of had ulterior motives,'” Daniel Feuerriegel said in the July 5, 2022, issue of Soap Opera Digest. “But the chief driving factor in all of this is they do have feelings for each other. The whole time EJ has known that if he did [sleep with Belle], Sami would find out eventually. But that’s only a fraction of the reason he wants to be with Belle.”

Belle is also hurting after seeing how close Shawn Brady (Brandon Beemer) is getting with Jan Spears (Heather Lindell) now that Jan had Shawn’s baby so she just decides to go for it with EJ. Whether this leads to something serious remains to be seen. Stay tuned to Days of Our Lives weekdays to see how this story plays out.