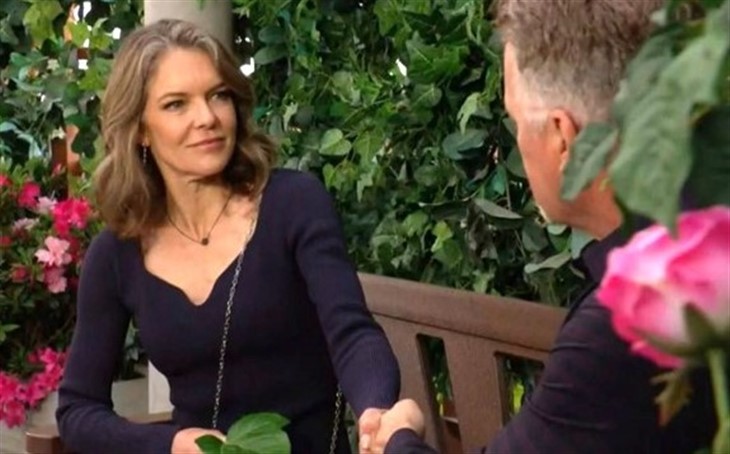 The Young and The Restless (Y&R) spoilers and updates tease that there will be double trouble right there in Genoa City! Diane Jenkins (Susan Walters) and Ashland Locke (Robert Newman) are poised to move on with each other in future Y & R episodes!

The Young And The Restless Spoilers – Will Victoria Newman Get Jealous?

Viewers have noted in recent Y & R episodes that Victoria Newman (Amelia Heinle) isn’t completely over her ex; she couldn’t just turn her feelings off like a faucet! Instead, she’s been denying them and pushing them down, and that may mean she’ll get jealous seeing him move on! It will be even worse when she sees who he’s moving on with – one of her mother Nikki Newman’s (Melody Thomas Scott) worst enemies!

Victoria won’t want to believe that her ex is moving on with Diane Jenkins, the woman who ruined her mother’s life by framing her for her “death”! Birds of a feather may flock together, but Victoria and Nikki kind of would rather kill those two birds with one stone!

Victoria’s heart may feel torn between hating Ashland and loving him, but then there’s also her pride to consider and her fear that she may be pushed off the Newman throne. Her family, especially her father, Victor Newman (Eric Braeden) won’t want the scoundrel anywhere near his daughter. Victoria is keeping her guard up and her embarrassment at believing Locke’s phony cancer stories will be a deterrent at least for a while. But if she were to run after him seeing Diane might snatch him, Victor would question her judgment and her ability to run Newman Enterprises! There are forces trying to push them back together – namely Adam Newman (Mark Grossman) and Sally Spectra (Courtney Hope) but Diane Jenkins might woo him away from Victoria!

Previous Y & R episodes revealed that before Victoria moved on, she kept inserting herself into Billy Abbott’s (Jason Thompson) life when he was moving on with Lily Winters (Christel Khalil)! She would use their children as an excuse, but it was pretty easy to see that Victoria wanted Billy back now that he was with someone else! The same thing could happen with Ashland, if she sees that he is moving on with Diane; especially considering Diane’s a good bit older than Victoria!

Victoria as a younger and more attractive woman couldn’t help but feel offended and jealous if Ashland is smitten with the older Diane! She should be more worried that the two will team up for revenge!

Whether Ashland and Diane together are users or losers, if they’re beggars they can’t be choosers and they know that they are in a stronger position together. Ashland’s begging to get back in Victoria’s good graces and Diane’s in her son Kyle Abbott’s (Michael Mealor), and probably his father Jack Abbott’s (Peter Bergman) as well. Victoria should just be strong and decide the two deserve each other because all they’ll do is hurt each other in the end! But if they team up on equal footing and combine their evil natures, there’ll be double trouble in Genoa City!