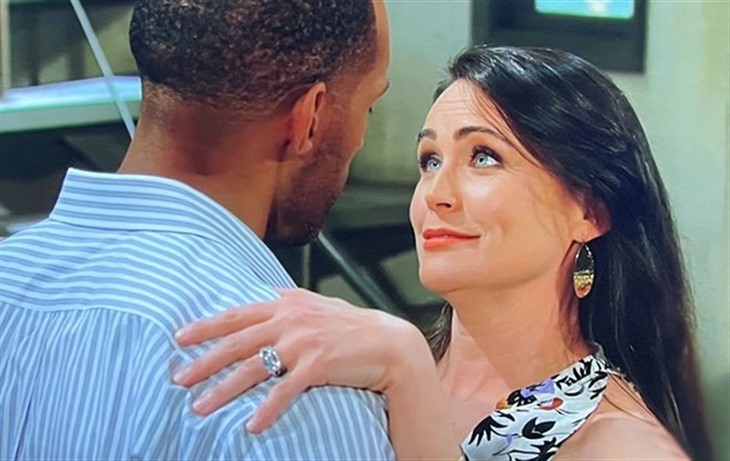 The Bold and the Beautiful (B&B) spoilers for the week of May 30 reveal that Carter Walton (Lawrence Saint-Victor) tells Quinn Forrester (Rena Sofer) that he’s still in love with her. However, Carter then turns around and gives Paris Buckingham (Diamond White) a chance. Is Carter leading Paris on until Quinn is available again, or is there another reason for the mixed message?

The Bold And The Beautiful Spoilers – Carter Walton’s Divided Heart

B&B spoilers reveal that Carter’s heart has been divided for quite some time. Ever since Carter first began his affair with Quinn, his feelings for her only got stronger. Despite not being able to be with one another and Quinn going back to Eric Forrester (John McCook), Carter’s feelings never faded.

Carter did try to explore romantic possibilities with Katie Logan (Heather Tom), but that didn’t go anywhere. Then, Carter and Paris had a fling, but Grace Buckingham (Cassandra Creech) put a stop to that. Despite everything, Carter never got over Quinn.

Fans already saw how Carter and Quinn are talking regularly again. Carter did get Quinn to admit that she still has feelings for the COO. However, Quinn made it clear that she is totally committed to Eric and won’t betray him ever again. Of course, Quinn doesn’t know about Eric’s affair with Donna Logan (Jennifer Gareis).

During the week of May 30, Carter will tell Quinn what’s in his heart. Carter will admit that he never got over her and is still in love with her. Of course, Quinn feels the same way. However, if she still doesn’t know about Eric and Donna, she could push Carter away.

The Bold And The Beautiful Spoilers – Giving Paris Buckingham a Chance

The Bold and the Beautiful spoilers reveal that Paris has noticed the connection between Carter and Paris. It is teased that Carter will begin to worry about what Paris will do with her observation.

Even though “Quarter” hasn’t done anything inappropriate, Quinn worries that Paris could make assumptions and blow up her marriage again. It seems that Carter will also get concerned about Paris blabbing to Eric. In fact, Carter decides to give Paris a chance, which stuns Quinn.

Quinn will keep trying to tell Carter that he can do better than Paris. However, Carter might tell Quinn that the woman he really wants to be with is a married woman and unavailable. This could push Quinn to make a decision about her marriage once again.

If Quinn doesn’t act quickly, Paris could end up back in Carter’s bed. Will Quinn end up having another affair, still unaware that she’s being betrayed as well? Or could the heart rate watch finally clue Quinn in about Eric’s extracurricular activities?

In any case, Carter is sending mixed messages to Quinn. Carter is also leading Paris on by letting her think they have a chance. Quinn and Carter’s love triangles are getting more complicated each week! So, we will have to keep watching to find out what happens next.