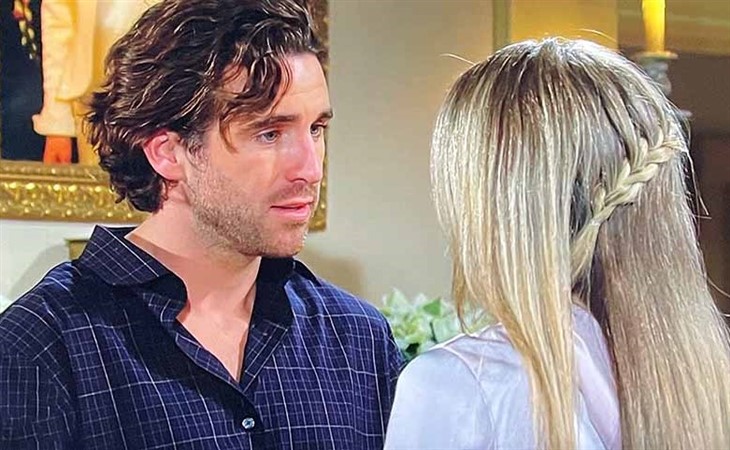 The Young and the Restless (Y&R) spoilers document that Chance Chancellor (Conner Floyd) continues to feel isolated. He has not been able to convince himself that he is a legitimate father figure.

Dominic Newman Abbott Winters Chancellor (Rainn and River Ware) benefits by having Devon Hamilton (Bryton James) in his life because he is his biological father. Devon’s heartfelt donation and Mariah Copeland’s (Camryn Grimes) selfless surrogacy allowed Dom to be born.

Abby Newman Abbott Chancellor (Melissa Ordway) is Dom’s biological mother. Her friendship with Devon dates back many years, which was a key reason why his offer was embraced by Abby and Chance.

The Young And The Restless Spoilers – Chance Chancellor’s Insecurity Believable?

Chance’s confidence was massively shaken through his experience in Spain. But rather than just second-guess himself and come to doubt his professional capabilities, Chance also allowed that bad situation to bleed into his personal life.

It does feel like Floyd’s character has been written down to further an arguably contrived story. Chance has no logical reason to feel insure when it comes to parenthood issues and is fully supported by his loving wife.

However, it is fair to say that Chance endured such a traumatic experience and now lost his Genoa City Police Department partner (Rey Rosales, Jordi Vilasuso). So, viewers can choose to suspend disbelief and accept that Chance is broken.

Devon intended to be the donor and then allow Chance to serve as Dom’s father forever. Conversations took place about Dom eventually being told Devon’s place in his life. But that talk would not happen for many years.

Some viewers were put off by Devon’s change of heart, which happened with Amanda Sinclair’s (Mishael Morgan) backing. But Devon was compelled to take a larger role in Dom’s life because Chance relayed his concerns.

So, Devon went beyond the initial agreement he made with Abby and Chance because Floyd’s character was asking for help. Chance understood Devon’s ask, and Abby later did as well.

Abby kept her family going after Chance decided that work was more important. He did not have to accept the assignment that was offered to him. Doing so led to Abby experiencing a series of stretched adventures.

Eventually TPTB recast the Chance role, hiring Floyd. Abby learned where Chance was, jetted overseas, and talked him into returning home. She has been a good wife, without question.

A projected development would have Chance stray from Abby as an outgrowth of his paternal insecurities. A similar misreading of his marital strength would be very soapy and inject additional drama into the lives of couple that has survived so much in the last year-plus on Y&R.