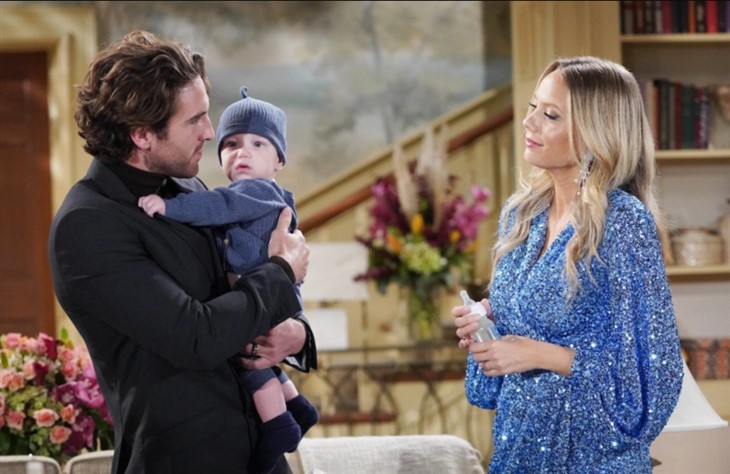 Viewers of The Young and The Restless know that Dominic’s condition could be serious or not so serious, but for Abby especially, the least little sneeze or cough could send her into a panic! Longtime viewers of The Young and The Restless know that Devon could overreact as well, even though he’s usually pretty laid back; the loss of his first child with mother Hilary Hamilton (Mishael Morgan) likely affects him subconsciously. As for Chance, he’s already dealing with new father jitters and a feeling of inadequacy regarding giving Dominic what he needs emotionally, so a sudden illness could throw him into a panic as well! Chance could worry that he didn’t see symptoms quickly enough to prevent Dominic’s illness from progressing or blame himself for the baby’s illness in some other way, even though he likely has nothing to do with it at all!

Y&R Spoilers – Could Blood Work Show Devon Hamilton Is Not The Father?

There is a chance this medical condition storyline could turn into a who’s the daddy story – some viewers of The Young and The Restless think sperm donations could have been mixed up! Viewers of The Young and The Restless will recall that Ben “Stitch” Rayburn (Sean Carrigan) was in town during that time, although he didn’t show himself until Mariah Copeland (Camryn Grimes) had tested pregnant as the surrogate. Many viewers will recall someone lurking around the Chancellor mansion watching Abby right after Chance left on his mission, and if he had switched Devon’s sample with his own, that’s a good reason for kidnapping Mariah! Stitch may have wanted to control the situation so he could get the baby when he was born – but was prevented from doing so, possibly to replace his own son who may have died, although nothing is certain. If Devon isn’t really Dominic’s father that could certainly put the ball back in Chance and Abby’s court – if Chance doesn’t insist on finding the real father!

The Young And The Restless Spoilers – If Devon Hamilton Is The Father, He Could Argue Over Treatment Options

Viewers of The Young and The Restless would not be one bit surprised if Devon does prove to be the father, as he is supposed to be, he could argue with Chance and Abby over treatment options! Devon just seems to have that knack of being overbearing and controlling in a nice way, so one doesn’t always realize how overbearing and controlling he really can be until a situation like this comes up! Viewers of The Young and The Restless would agree it would probably be better if Chance were to be the first one to see symptoms of illness in Dominic and be the first one to seek medical attention for him. That would beef up Chance’s confidence as a new father and limit Devon’s role in Dominic’s life, plus Chance might bond with Dominic through the potential crisis, even though Devon might still try to take control!

GH Spoilers: Lisa LoCicero Reveals It May Be A While Before She Returns To California