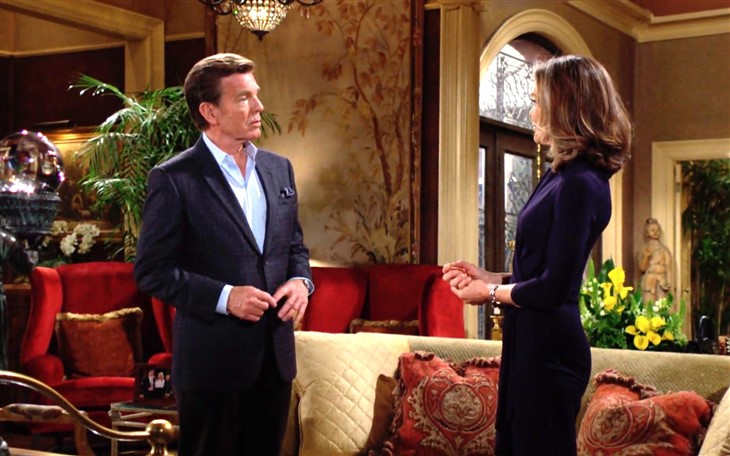 The Young and the Restless spoilers document that Jack Abbott (Peter Bergman) is being drawn into Diane Jenkins’ (Susan Walters) web. This natural development is hardly as sinister as Phyllis Summers’ (Michelle Stafford) believes but also is not innocent.

Diane has an agenda and is implementing it. She wanted to apologize to the son, Kyle Abbott (Michael Mealor), she had with Jack. Mealor’s character has responded better than she could have imagined and that bothers Phyllis.

On the above point, Phyllis is purely petty. However, she has every right to be upset about Diane’s intentions toward Jack.

Facilitating Jack and Allie’s introduction was a manipulative way to forward Diane’s back-from-the-dead plans. Jack was enraged as a result. Allie was upset.

As for Phyllis, The Young and the Restless spoilers show she rushed to LA, knowing that trouble was dead ahead, with the soapy verbal jab intended.

With Keemo having died, Kyle is Jack’s only surviving child. Devoted fans know that John Abbott III (no actor cast to play this role) died shortly after birth.

Kyle’s mother is a unique person in Jack’s life. Diane knows that and is relying on her fixed place to hopefully reclaim a spot in Jack’s heart.

But has Jack ever fully erased her from his mind? It does not seem so.

Phyllis achieved a level of relative calm in recent years that longtime viewers noticed. Stafford’s return to the show in 2019 was a stunner. It was followed by a development of this character.

Jack appeared to be realizing his hope of reuniting with Phyllis. Then, Diane reappeared in the world, and all has radically shifted since.

Diane can not be underestimated. Phyllis was quickly pushed out of Jack’s future romantic plans, with Stafford’s character fearful that Diane is supplanting her.

Bergman’s character told Phyllis that he can never trust Diane. But daytime is about change, with Jack’s mind slowly adjusting in favor of Kyle’s mother, who is also Harrison Locke’s (Kellen Enriquez) grandmother.