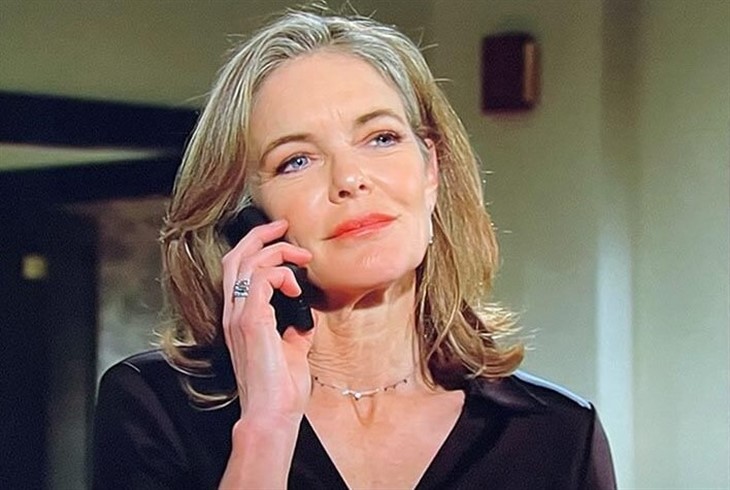 The Young and the Restless (Y&R) spoilers tease that Diane Jenkins (Susan Walters) has finally gotten her fondest wish after returning from the dead, meeting up with the son she abandoned. This week Kyle Abbott (Michael Mealor) allowed his mom to try and explain why she left him to cry himself to sleep at night after faking her death years ago. Did she pass the test?

His dad Jack Abbott (Peter Bergman) and MIL Phyllis Summers (Michelle Stafford) came home before Kyle was forced to give Diane a concrete answer. If Red and her daughter, Kyle’s wife Summer Newman (Allison Lanier), have any say so, Diane may want to rethink her plan to stay in Genoa City, Wisconsin.

Summer is still in Italy, but the recast character is coming back and no doubt she will fall lock step into line with her mom in terms of hating Diane. These two teamed up to get Sally Spectra (Courtney Hope) to leave, and she’s still around, so maybe Diane has nothing to worry about after all.

Still, Phyllis is not one to give up without a fight, and Diane looks to have her eye on Jack so that will make her twice as determined to rid the town of evil Diane. Phyllis and Jack bonded when they were in LA recently, which is where Diane resurfaced.

Before they left GC for LA, Phyllis vowed to look out for Jack. She’s not about to back down now that the threat has become personal and Summer will want to protect Kyle from his she-devil mom. When Diane pretended to be dead she let Nikki Newman (Melody Thomas Scott) take the fall for her death, but Kyle was also greatly affected.

Explosive show spoilers tease that Diane’s return will be just as mind blowing as her departure, with plenty of drama and twists and turns still to come.

Diane may not approve of her son being married to Phyllis’ daughter and she’s shown that she is a force to be reckoned with. By all accounts, May Sweeps will be full of fireworks as the ladies get set to do battle over Kyle and Jack!
Be sure to catch up on everything happening with Y&R right now. Come back here often for The Young and the Restless spoilers, news, and updates.

Prince William And Kate Middleton Moving Closer To The Queen?