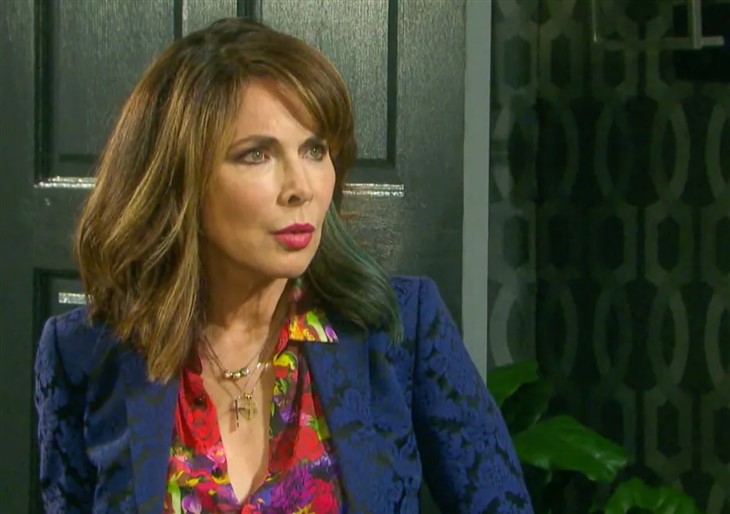 Days of Our Lives spoilers reveal that Roman Brady (Josh Taylor) worries that something has happened to Sami DiMera (Alison Sweeney). When Roman shares this with Kate Roberts (Lauren Koslow), she will be torn. Kate is keeping Lucas Horton’s (Bryan Dattilo) crimes a secret from Roman. However, could both Lucas and Sami be in danger?

DOOL spoilers reveal that Roman becomes worried about Sami. It appears that Roman might try contacting Sami to tell her about the devil possessing both Johnny DiMera (Carson Boatman) and Allie Horton (Lindsay Arnold).

During the week of May 9, Roman will talk to Kate about his fears. Roman will inform Kate that he is worried something’s happened to Sami. Roman will probably ask Kate if she’s spoken to Lucas lately.

Of course, Kate knows about what Lucas did to Sami when she disappeared for three months. Kate is also aware that Lucas framed EJ DiMera (Dan Feuerriegel). Kate keeping this huge secret from Roman could destroy their relationship. Plus, Kate might worry that Lucas has done something else that could land him in prison.

Days Of Our Lives Spoilers – Trying To Reach Lucas Horton

Days of Our Lives spoilers reveal that Kate might try to urgently reach Lucas. It’s confirmed that Lucas and Sami eventually come back to Salem. It’s unlikely that Lucas holds Sami hostage again. This is due to the video teaser that shows Sami will still be torn between Lucas and EJ. There is no way Sami would forgive Lucas if he were holding her hostage… especially twice!

If Kate can’t reach Lucas, then that pretty much confirms that something’s happened to “Lumi.” Kate will be torn over whether to confess the whole truth to Roman. Meanwhile, Lucas and Sami need to be found. If they are missing, what’s happened to them and who is responsible?

Could Kristen DiMera (Stacy Haiduk) be involved, especially since she’s on the run again? Remember, Kristen had a deal with Sami at one point. However, when Rafe Hernandez (Galen Gering) found out the truth, Kristen wanted to punish both Lucas and Sami.

Perhaps when Kristen fled the deserted island, she went to Europe. If Kristen crossed paths with Lucas and Sami, it could mean she’s done something with the Salemites. Share your thoughts and remember to keep watching the NBC soap to see what happens next.