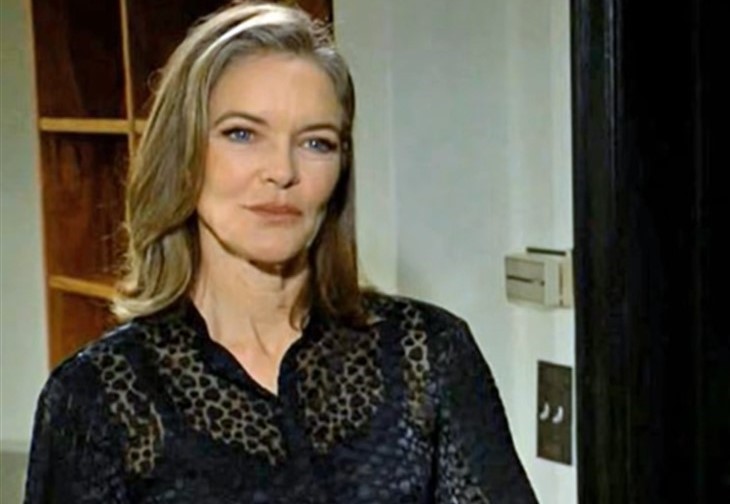 The Young and the Restless (Y&R) spoilers for Friday, May 6, 2022, reveal Diane making a surprise visit — or at least it is a surprise for some.

The Young And The Restless Spoilers – Abbott Family Chaos

Kyle Abbott (Michael Mealor) is still reeling after learning his mother has been alive this whole time and Diane Jenkins (Susan Walters) abandoned him as a boy. Still he has had several talks with her now and decides to invite her to the Abbott mansion, which is quite a surprise to the Abbott siblings when they sit down to have a family meeting.

It turns out Kyle knew what he was doing. He wants his mother to have to face the people she wronged so much and they want to face her. However, Diane is in no mood to face them. She just thought she would see her son and Jack Abbott (Peter Bergman), which was fine, but Ashley Abbott (Eileen Davidson) and Traci Abbott (Beth Maitland) are there too and Diane doesn’t like this at all.

What will they all have to say to one another that won’t leave them all wanting to strangle one another? And will Diane get out of there unscathed?

Like so many people, Adam Newman (Mark Grossman) just can’t believe what an entitled, cold, unfeeling, brat his big sister, Victoria Newman (Amelia Heinle) is. He helped her out of her mess with Ashland Locke (Robert Newman) and she still treats him like trash and it looks like Victor Newman is even sanctioning Victoria’s latest move making Nikki Newman co-CEO.

So, once again, Adam considers cutting ties with his family, something he does often, although he always returns. Will it stick this time? Will Sally Spectra (Courtney Hope) support him and stand by his side?

The Young And The Restless Spoilers – Billy Abbott Finds Success

It isn’t often when Billy Abbott seems to come up with a new business project and have it turn out right but that is exactly what seems to be happening for him. He celebrates with Lily Winters, but that celebration is later cut short by someone else and Lily does not who she sees at all. Stay tuned to The Young and the Restless weekdays to see how these stories play out.

Days of Our Lives Spoilers: Ciara And Satan’s Baby Is Ready To Be Born