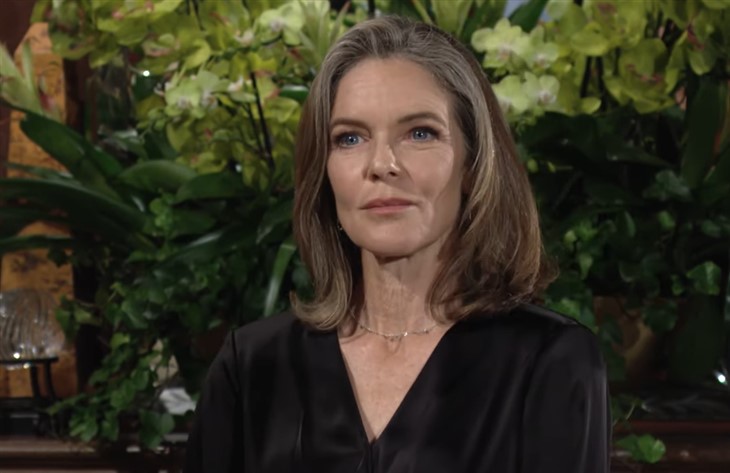 The Young and the Restless spoilers reveal Diane’s worst nightmare coming true when she opens the Abbott family’s front door.

The Young And The Restless Spoilers – Diane Jenkins Attempted Honesty

When Diane Jenkins (Susan Walters) returned to the Genoa City scene she did everything she could to hide her activities of the past 10 years when everyone thought she was dead, but Phyllis Summers (Michelle Stafford), Nikki Newman (Melody Thomas Scott), and Ashley Abbott (Eileen Davidson) just couldn’t leave well enough alone and things just came out little by little.

When Tucker McCall (Trevor St. John) arrived in town, Diane knew she was in trouble and tried to head things off at the pass by telling Jack Abbott (Peter Bergman) and Kyle Abbott (Michael Mealor) dribs and drabs of her long and sordid tale so that they could hear her side of the story.

Phyllis, Nikki, and Ashley did not like this, so they went even further to try to get information and have no idea their latest find can truly put Diane in grave danger. They just wanted to run her out of town and not kill her. Nikki was finally allowed to alleviate her guilt so Diane’s death wasn’t in the cards.

This week, Diane is left alone in the Abbott house when there is a knock on the door. She takes the liberty of opening it and her worst nightmare appears. When Diane sees Jeremy Stark (James Hyde) standing there, she is terrified because he knows how dangerous he is and that he might be the one to finally end her.

She is the one who gave the testimony that put Jeremy behind bars and now that he is out, he is going to want her revenge and thanks to Nikki, Phyllis, and Ashley, he was easily able to find her.

Has Jeremy mellowed at all during his time in jail or is he just as ruthless as ever. If Diane can play the sympathy card with such a man after her, Phyllis and company may finally realize they were playing with the wrong woman. We are sure Jack and Kyle won’t be happy about this turn of events at all… Stay tuned to The Young and the Restless weekdays to see how this story plays out.