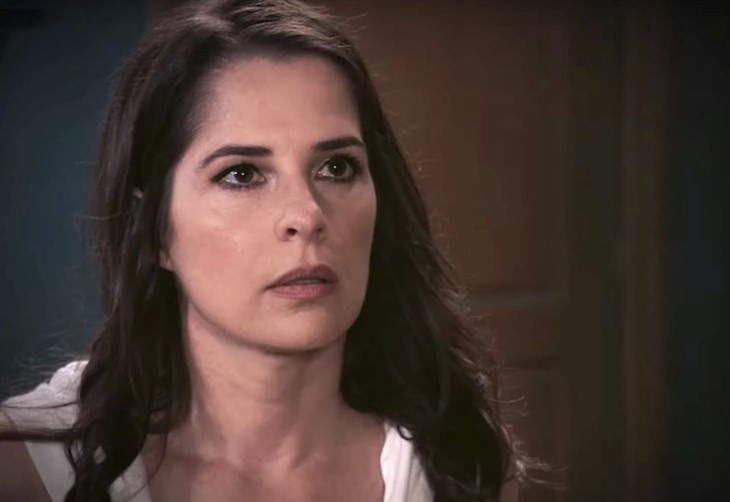 General Hospital spoilers reveals, last time Sam McCall (Kelly Monaco) sat down to catch up with Carly Spencer (Laura Wright), they were interrupted just before Carly could get to explaining the better parts of her extended stay in Jacksonville. Sam was pushing for more, but Drew Cain (Cameron Mathison) arrived in the nick of time to squash it before anything could be said.

While Carly and Drew might have diffused the situation, Sam is no dummy. In fact, she’s a private investigator. She knows something is going on, and she’s not quite sure why they aren’t comfortable letting her know. Is she going to wait for them to change their minds, or will she snoop around a bit first on her own? What do you think?

When Carly was filling Sam in on the details of her trip, she left out one very big part of it — the weeks she spent with Drew. General Hospital spoilers show Sam isn’t one to leave an elephant just sitting in the room. She wanted to clear the air to make everyone more comfortable. More importantly, she wanted to give Carly the opportunity to tell Sam herself that she was seeing Drew, so that Sam could show her how perfectly fine it was with her. That didn’t happen though. Thanks, Drew!

When Drew abruptly nosed his way into the conversation, Sam was taken aback. Truthfully, so was Carly. She wasn’t holding out on telling Sam because she thought there was anything wrong with it — or because she thought Drew might not want her to. She just wasn’t sure how to deliver that kind of news to Sam. However, Drew’s insistence that he and Carly sidestep the conversation to chat left both Carly and Sam feeling like they might have done something to upset him. However, Drew gave Carly an explanation, but Sam was left to put the pieces of that strange altercation together on her own, and that’s where trouble might start brewing.

Leaving someone to their own devices to figure out what is going on between two other people isn’t usually a big problem. If the two people in question — in this case, Drew and Carly — are interested in keeping their relationship under wraps, it’ll be hard for anyone else to figure out they’re more than friends. But Sam isn’t just anyone else. Leaving your ex-wife, who is also a private investigator, to her own devices to figure out what you’re up to with another woman is a different story.

It won’t take Sam long at all to confirm her suspicions about Carly and Drew being a couple. The problem? Why are they hiding it? Sam might start to think there’s a more personal reason than professional or legal one at this point. Will that cause Drew to have to come clean with her just like Carly felt she had to with Sonny Corinthos (Maurice Benard)? What happens when too many people get wind of this romance? It sure is going to make it tough to be sure who reports them to the SEC, because we all know that’s going to happen.

Keep checking back for more General Hospital news and spoilers as we continue to dish them out all day, every day.