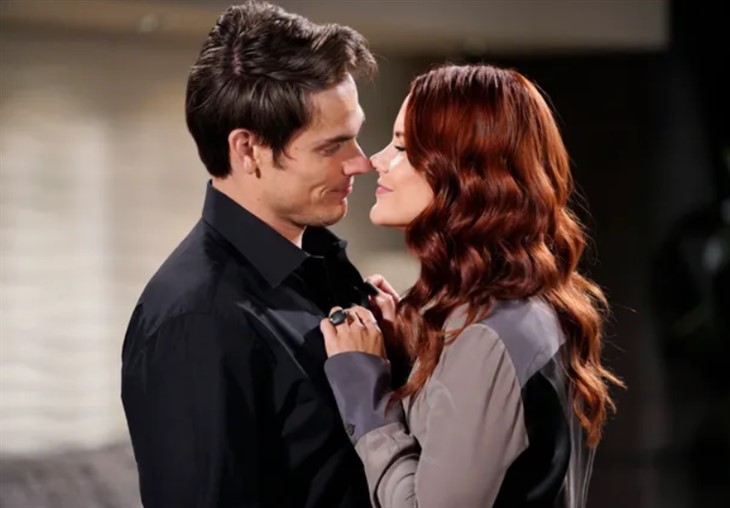 The Young and the Restless (Y&R) spoilers for November 28-December 2, 2022, reveal Adam and Sally confronting their feelings and Diane confronting her past.

Sally Spectra (Courtney Hope) was furious and mortified when a drunken Adam Newman (Mark Grossman) proposed to her in public after seeing her out with Nick Newman (Joshua Morrow). When they run into one another again at Society, Sally is not in a good mood when Adam approaches her, but he can tell his proposal ignited feelings that weren’t all bad.

They decide to take things back to Sally’s room at The Grand Phoenix where Sally finally admits that she does indeed still have feelings for Adam and wants him. That causes them to fall into a passionate kiss, but will Sally stop herself before going too far?

Meanwhile, The Great Victor Newman (Eric Braeden) issues Nick a harsh warning. Does he want him to reconsider his relationship with Sally?

Diane Jenkins (Susan Walters) has been doing her best to cover her tracks so that Nikki Newman, Phyllis Summers (Michelle Stafford), and Ashley Abbott (Eileen Davidson) wouldn’t learn everything she was up to when she was supposedly dead, but it’s been to no avail. Those three women are relentless and they think they have good reason.

At least Diane gets Jack Abbott (Peter Bergman) and Kyle Abbott (Michael Mealor) on her side when she tells them she refused Tucker McCall’s (Trevor St. John) demand that she become a corporate spy. However, she is not out of the woods yet when Jeremy Stark (James Hyde) shows up in Genoa City seeming like he wants revenge. Uh-oh.

A guilty Devon Hamilton (Bryton James) has to tell someone what went on between him and Abby Newman Chancellor (Melissa Ordway) in every corner of his living room so he fesses up to Lily Winters (Christel Khalil). Needless to say, she is quite stunned.

Nate Hastings (Sean Dominic) seems to feel no guilt at all when he questions Elena Dawson’s (Brytni Sarpy) loyalty. After all, hasn’t he been disloyal to just about everyone who has trusted him over the past few months?

Finally, Nikki and Ashley are furious to learn that Phyllis went rogue on them. Isn’t that always the way? Stay tuned to The Young and the Restless weekdays to see how these stories play out.