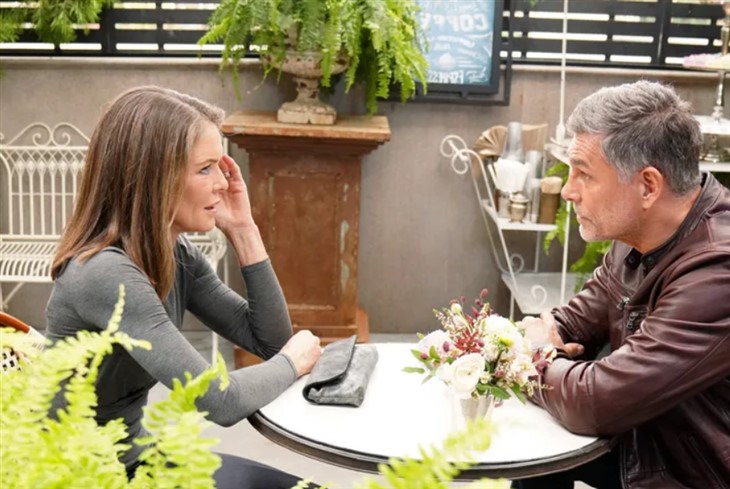 The Young And The Restless Spoilers – Out For Revenge

Diane had a nervous conversation with Jack Abbott (Peter Bergman) in which she told her fears that Ashley may have used her intel on Stark from Tucker McCall (Trevor St. John). Considering her animosity, and that of Phyllis and Nikki against her she feared they would find Stark upon his prison release and reveal her location. She empathized Stark being much more dangerous than just having laundered money and he could put the entire Abbott family in danger.

She has also been afraid Tucker himself would be a threat because she refused to help him with his plans to take over Jabot. Jack brings Kyle Abbott (Michael Mealor) into the loop and they both assure her nothing will happen to her, and their protectiveness stuns her.

Diane continues to pour out her heart and explain her fears to Jack and Kyle, worried that it would get back to Stark that she testified against him. The three women would be playing with fire if they aligned themselves with him, and he’s a much bigger threat than Tucker could ever be. Diane says they have no idea of the consequences of revealing her whereabouts, and it would be much more serious than merely running her out of town. They could very well be making deals with the devil that would not stop with his revenge on her, they could be endangering themselves. Diane learned the hard way that one doesn’t play with fire with the expectation of no burns.

The Young And The Restless Spoilers – Devil’s At The Door

Jack and Kyle can see that Diane has an extreme fear of Stark, and the danger they could all be in should he be given information where to find her. He only knew her as Taylor Jensen, he didn’t even know her real name but that wouldn’t matter-Ashley and the others are intent on their mission. They wouldn’t think twice about revealing her real name to Stark, not realizing what and who he really is.

It’s not long until Diane’s worst nightmares come true; after Jack and the rest of the family go to work and she’s alone, there’s a knock at the door. It’s Jeremy Stark, hell bent on settling scores with her for turning him in!