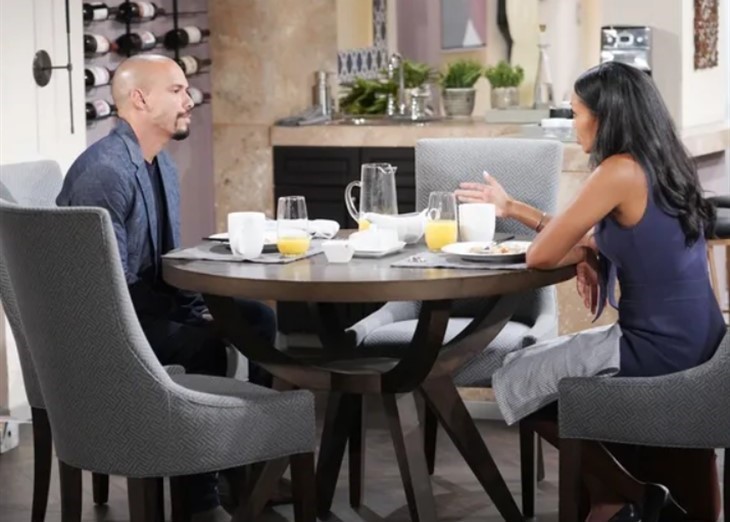 The Young and the Restless (Y&R) spoilers document that Devon Hamilton (Bryton James) has unknowingly entered what will be a rough family fight. Nate Hastings (Sean Dominic) is allowing himself to be influenced by Imani Benedict (currently played by Leigh Ann Rose’s stand-in, Denise Boutte) to further his power plan.

Victoria Newman (Amelia Heinle) jumped at Nate’s offer to provide insider intel about Chancellor Winters stock offering. He intends to usurp power at CW when Newman Enterprises obtains a fifty-one percent or more stake in what will become a public company.

Devon clearly is in need of Amanda Sinclair’s (Mishael Morgan) watchful eye. But she is caring for her and Imani’s mother, who is in ill health.

The Young And The Restless Spoilers – Imani Benedict Is Single-Minded

Imani and Amanda share a mother. But other than that, they are as different as two people could be.

The persistent disrespect Imani demonstrated toward Elena Dawson (Brytni Sarpy) was aimed at splitting her from Nate. As fans recently saw, Elena moved out of the penthouse and has separated from Nate because of his revealed efforts to stab Devon and Lily Winters (Christel Khalil) in the back.

Nate never sloughed off Imani’s flirtations. That reaffirmed a need to have his soft ego pumped. Imani wants Nate and now appears primed to get him.

Nate was a surgeon. The past tense has to be used about his vocation because Devon’s physical attack left Nate unable to use one of his hands and unable to continue to pursue his chosen vocation.

Appearing to come to terms with what happened and the role he played in provoking Devon’s anger, Nate decided to make a major career shift. He was led to believe that he would be a decision-maker within CW.

Nate’s bitterness is understandable but is also overdone. He interfered in Devon’s personal relationship with Elena. She chose to leave Devon and be with him. That drama led directly to the revenge plan that Nate is pursuing against his family’s business.

Morgan recently offered public comments about volunteering to drop to recurring status many months ago. TPTB created a storyline where Naya Benedict (Ptosha Storey) developed health problems and eventually needed to move to a health care facility, where Amanda has frequently visited.

However, Morgan has recently recorded scenes that will allow fans to see the Daytime Emmy Award Winning actor once again. But Devon will need more than Amanda’s sporadic presence in his life to deal with the trouble Nate is creating.

Since Morgan is not a regular cast member, Amanda is projected not to remain in Genoa City, Wisconsin, on a regular basis. That leaves the door open to Imani. She could target Devon just as she did Nate, with the potential of an explosive triangle becoming a reasonable assumption on Y&R.