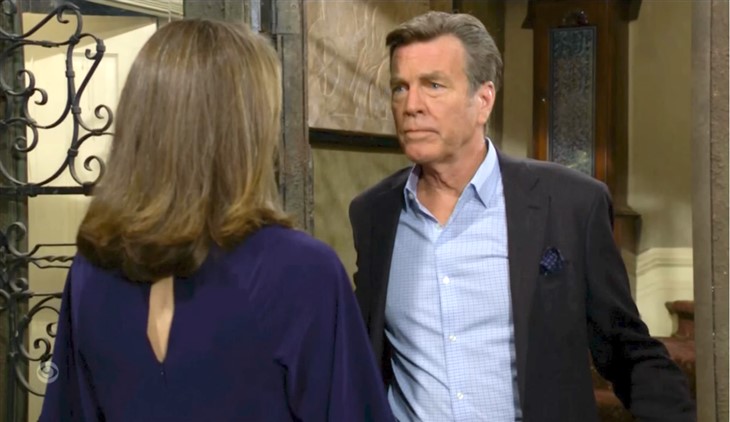 The Young and The Restless spoilers and updates tease in this week’s Soap Opera Digest that Diane Jenkins (Susan Walters) will plant an impulsive kiss on Jack Abbott (Peter Bergman). She didn’t come over intending to do so but she hopes he liked it.

The Young And The Restless Spoilers – She Brings A Toy

Being a stereotypical grandchild spoiler grandma, Diane shows up at the Abbott mansion with a toy for Harrison Locke (Kellen Enriquez). She asks Jack to give it to him, considering the drama that has been happening between herself and Phyllis Summers (Michelle Stafford) at work. She admits to Jack that the toy is an excuse to see him as well as an impulsive grandma’s gift, and he invites her in.

She explains that Phyllis having appeared to call a truce has led her to wonder if Jack will ever truly forgive her. She really has worked hard to become a better person, but she needs to know if Jack believes she’s changed.

Diane continues, knowing that toleration and acceptance are two very different things. It’s easy to tolerate someone being in the same room as you are, but to forgive them and truly accept them is a much more difficult process. Jack does answer her questions, that while he hasn’t come to the point of total forgiveness for the past, that at least he’s willing to forget.

The Young and the Restless spoilers show Diane is so happy for just that much that she impulsively plants a kiss on his face, and hopes at least he’s flattered, although she didn’t come over there for that. The kiss isn’t a sexual thing at all, just a response of pure gratitude and happiness for Jack’s understanding and his willingness to forget the past.

The Young And The Restless Spoilers – Where From Here?

Diane isn’t sure where, if anywhere she and Jack will go from here or if he might even warn her not to try that again! So far he is a little blindsided and understandably, shocked at her impulsive move, one can imagine she might apologize. But then again, maybe he’s just surprised and enjoys seeing her overjoyed like that.

Earlier in the week he’d found her in tears on a bench in Chancellor Park over the confrontation with Phyllis, who Jack suspected started it and was pushing her buttons.  Diane is grateful that Jack appears to be on her side in this war with Phyllis that she is all too tired of fighting, even though Phyllis might fake future truces.