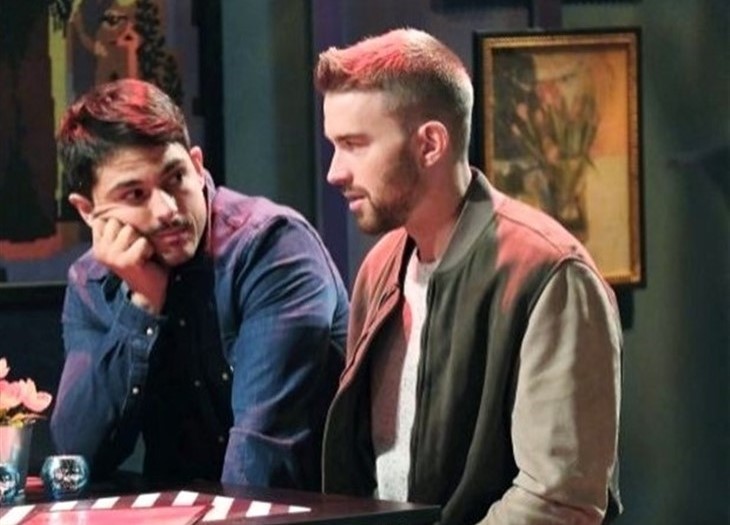 Days of Our Lives spoilers and updates tease that Will Horton (Chandler Massey) will try to make peace between Sonny Kiriakis (Zach Tinker) and Alex Kiriakis (Robert Scott Wilson). Will hates fighting and family dysfunction and he just wants the brothers to stop the battle.

Days Of Our Lives Spoilers – Alex Kiriakis Crossed A Line

As far as Sonny is concerned, Alex crossed a line when he tried to take his job at Titan when he was recovering from being stabbed. Alex had explained that Victor Kiriakis (John Aniston) had told him to step in but Sonny felt that he took too much liberty to outdo him. Sonny found out that Alex tried to make a lot of changes that he wasn’t authorized to make, to policies and procedures that were implemented for a reason.

That gave Sonny the impression that Alex was trying to replace him for good, overriding policies that Sonny himself had instituted and implemented. A temporary replacement upholds the status quo, not tries to change it at a company.

The more Sonny and Alex interact, the more the arguments appear to ramp up. Oftentimes they will start arguing right in front of Will, and Will is getting tired of it. Growing up with Hurricane Sami Brady (Alison Sweeney) as a mother, he grew up with family infighting and he prefers for there to be peace and cooperation. Will knows that there must be a place of middle ground where Alex and Sonny agree on something, and he starts trying to get them to that place.

No one has yet checked in with Sonny and Alex’s middle brothers to see if Alex’s and their stories line up as to why Alex left their company. Privately, he suggests to Sonny that perhaps he should, to see if maybe he really was fired, since his over-the-top personality isn’t everyone’s cup of tea.

Days Of Our Lives Spoilers – Will Horton Pushes For Peace

Will keeps trying to be mediator between Alex and Sonny and pushes for peace and a meeting of the minds. There has to be a common goal that the two could work towards together and they could agree on. First Will tells Sonny that since he is back in charge, just to look at some of Alex’s ideas he implemented even if he did move forward too soon.

He tells Alex to try to put himself in Sonny’s shoes and understand why he shouldn’t have tried too hard and just went with what Sonny would have wanted. Most of all he tells both of them to lay some strategies and ideas on the table and see where they agree, and where they don’t, and figure out why.