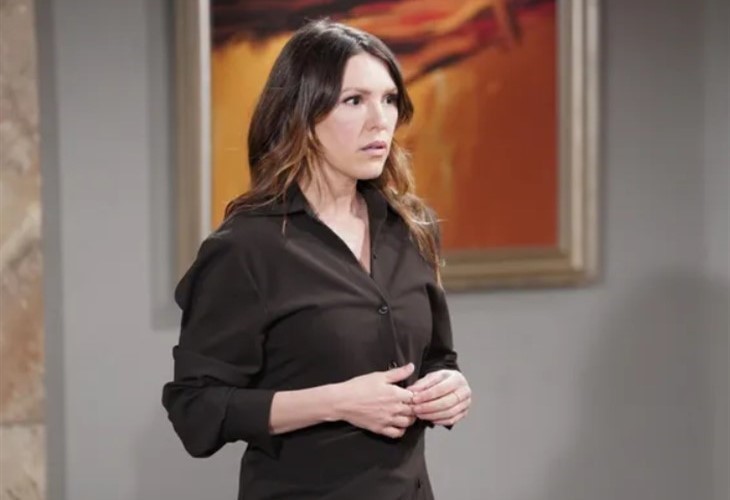 The Young and The Restless (Y&R) spoilers and updates tease that Chloe Mitchell (Elizabeth Hendrickson) will help her mother, Esther Valentine (Kate Linder) begin a new chapter in her life. This will take place in an upcoming Y & R episode!

The Young And The Restless Spoilers – Chloe Mitchell Feels Like Her Mother Is “Grandma-ing” Too Much!

Chloe feels like her mother is “grandma-ing” too much and needs a life outside of changing diapers, making cookies, and helping her older child with her homework! Of course, Chloe greatly appreciates all the help her mother is giving her with the children but she wants to see her do something for herself. It’s been many years since Esther has had any kind of life outside housekeeping duties for Katherine Chancellor (Jeanne Cooper) when she was still alive.

Chloe thinks that Esther is merely transferring her work for Katherine to her house and being grandma to her children as she cleans house for her besides! Chloe sits her mother down and talks to her about doing something for herself and not being so totally other-centered.

Esther surprises – make that shocks – Chloe when she reveals what she’s been doing – she actually has been using a dating app, Chloe not realizing her mother was that computer literate! She tells Chloe that it is a dating app especially for seniors, but she hadn’t had a lot of interest and asks her to look at her profile. Esther, as a whole, hasn’t had a lot of luck with men – two ex-husbands named Norman (uncast character) and Roger (uncast character) had been con men. Tiny the plumber, Chloe’s father, had been a one night stand, so he was long gone by the time Chloe was born. Chloe agrees to look at her mother’s online dating profile and help her make improvements if needed, and they both agree it needs it!

Esther knows she’s taking a chance by trying this new way of dating anyway – anyone from anywhere can go online and make a dating profile. There have been plenty of cases where rich widows were taken for all their money by con men but Esther thinks she can avoid those. After all, she’s had experience with con men, and besides, she’s certainly no rich widow so she probably wouldn’t attract that kind!

Esther thought when she had that one night stand with Tiny when Chloe was conceived that maybe the third time would be the charm. But as it happened, it was more like three strikes and she was out, and hadn’t thought about men or dating again until just recently!

Esther is surprised that her new and improved profile is actually generating some interest! But she can’t help but wonder whether this guy is going to be a hit or a miss, since she’s had so much bad luck in the past. Chloe promises she’ll ask her husband to run a background check on the potential suitor, just to be on the safe side. The last thing either Chloe or Esther wants is another con man or worse to be a potential boyfriend!