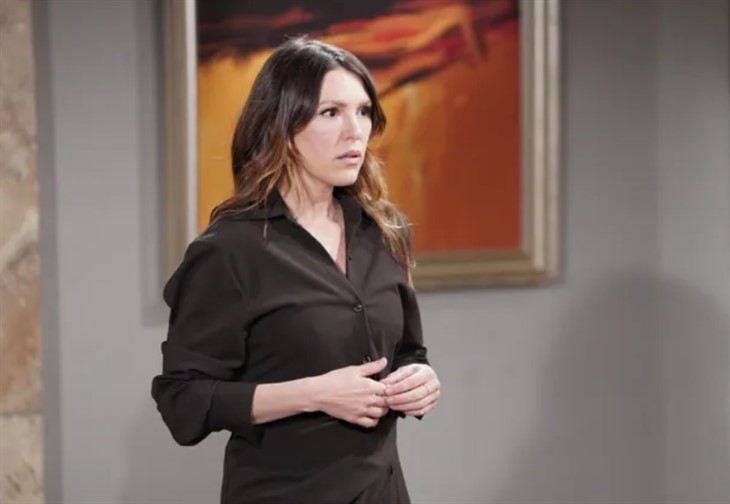 The Young and The Restless (Y&R) spoilers and updates tease that Chloe Mitchell (Elizabeth Hendrickson) will get a job offer from Sally Spectra (Courtney Love) in an upcoming Y & R episode!

Previous episodes of Y & R revealed that Chloe and Chelsea Lawson (Melissa Claire Egan) have come to an impasse both personally and professionally! Chelsea has not been the same since her good friend Rey Rosales’ (Jordi Vilasuso) death and she also struggled over Adam Newman (Mark Grossman) moving on with Sally. Chelsea is feeling controlled and micromanaged by Chloe, while Chelsea seems to be getting on Chloe’s last nerve and Chloe’s feeling manipulated; and Sally has happened to witness some arguments.

Sally recognizes the partnership as well as the friendship is beginning to become toxic and she reaches out to Chloe. Sally has on occasion looked at some of Chloe’s design work and has been impressed, but also she is reaching out to her as a friend.

One argument that Sally happened to overhear between Chloe and Chelsea at Society was how Chloe had been there for Chelsea when she needed her but now it’s not reciprocated! Chloe was even willing to work for Adam, the person she hates the most in the whole world, to make sure Chelsea had a job! But now Chelsea is acting selfish and not being there for Chloe like she used to be and Chloe’s getting fed up! Chloe opened up to Sally when she reached out to her, and really appreciated her extending her friendship and a sympathetic ear to her. Chloe also admires Sally, knowing she voiced her goals and met them and made it to the top – Chloe is very impressed with that!

Sally, back at her and Adam’s office, talks about Chloe and the situation between her and Chelsea, and discusses hiring Chloe. Chelsea, of course, is Adam’s ex-wife and the mother of their son Connor Newman (Judah Mackey). He knows Chloe very well and also knows she hates his guts, although he doesn’t hate her, and doesn’t have any problems if Sally wants to offer her a job.

Adam knows firsthand that Chelsea can be difficult to deal with, live with, and work with when she gets like that. Sally tells him Chloe didn’t say she was looking for another job but she could see she was stressed out and also that she was very impressed with her designs!

Sally calls Chloe to come see her in her office, and promises her it will be worth her while to come. When Chloe arrives, she is stunned, but pleasantly so, when Sally offers her the COO, or Chief Operating Officer position at Newman Media! Chloe is definitely interested but also wants to carefully weigh in her mind if it’s the right move for her or not. She knows she’ll have to act quickly because someone else could get it if she doesn’t make a decision. She also knows if she takes it the company she and Chelsea have together is no more, and Chelsea will have to deal with it; and that’s about to happen!