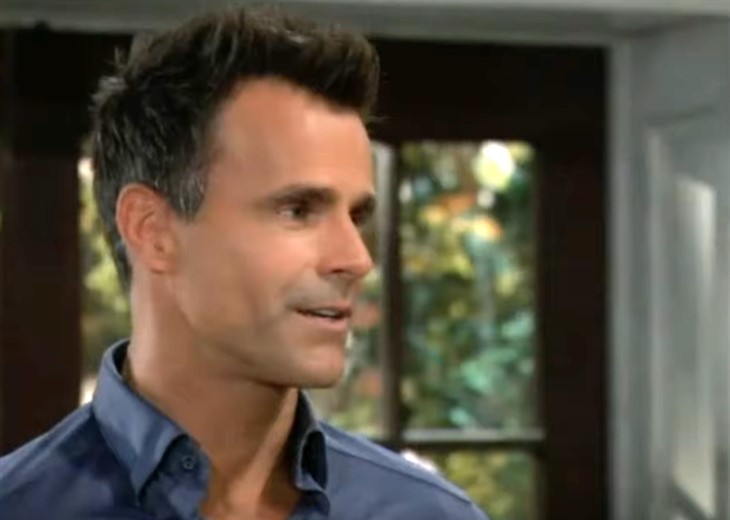 Nina walks into her office at Crimson Magazine and sees Drew sitting on a chair by her desk. Nina tells him she doesn’t see him in these offices much since he took over for Jax (Jasper Jacks, formerly Ingo Rademacher). Drew responds, telling her he knows she runs a tight ship and it’s profitable; and he doesn’t like to micromanage when he knows business is going well. Nina thanks him, but notes that yet, here he is; and he’s there to offer her some help?

Drew tells Nina that she makes his help sound like a different four letter word! Nina is obviously a bit suspicious, wondering if he has some kind of an ulterior motive or angle!

Nina reminds Drew that he had previously made it very, very clear what he thought of her and wonders exactly how “beneficial’ his help would be! Drew then takes a deep breath, and tells her to leave Carly and Sonny Corinthos (Laura Wright, Maurice Benard) out of it, noting it’s not personal, it’s just business. Nina then mentions that she has been hearing that business isn’t exactly booming these days since the Aurora Media/ELQ merger didn’t happen. Drew says he admits Valentin Cassadine (James Patrick Stuart) got ahead of him and Michael Corinthos (Chad Duell); Nina asks what does that mean for his future? Drew looks like he isn’t looking forward to giving her an answer.

General Hospital Spoilers – The Stock Is Going To Recover Eventually

Drew tells Nina he knows that the stock is going to recover eventually, and so will Aurora Media; maybe even faster with a change at the top! Nina looks alarmed and then she’s the one taking a deep breath, knowing he must be talking about selling Crimson Magazine, and if he does, she’ll have a new boss. Nina brought the magazine to life, literally from the grave over the past years after Julian Jerome, going by Derek Wells (William DeVry) hired her for a tax write off!

She made Crimson Magazine very successful, even when the first issue was printed on green paper and she made lemonade out of lemons – and a huge profit! She will have a lot to consider and a lot of stress wondering if a new owner would try to run it in the ground like Julian wanted her to!

But Drew is going to be fair, and give Nina herself the first chance to buy her magazine; it will depend on the asking price if she will be able to. But she will have to consider all the possible scenarios before making a decision; Drew likely isn’t selling to make a profit, he probably needs the cash! Aurora Media handles all the overhead of running the magazine and she knows if they go down, Crimson goes down anyway. Nina will have a lot to think about over the next few days as she considers his business proposition!