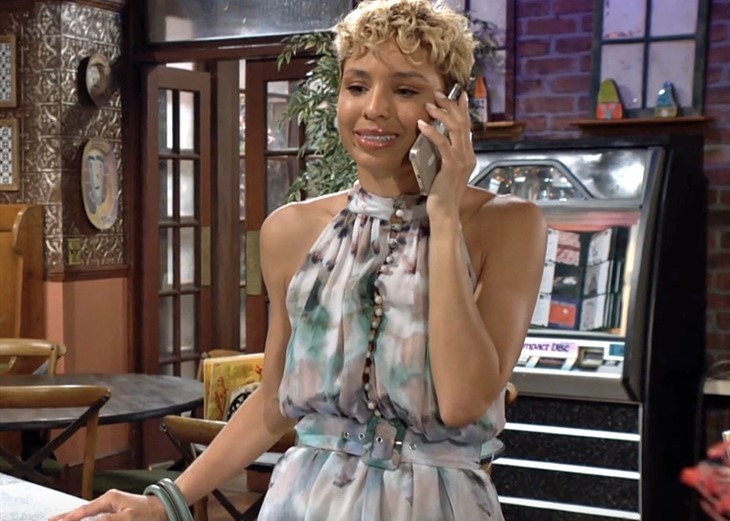 The Young and the Restless (Y&R) spoilers document that Elena Dawson (Brytni Sarpy) can not get away from Imani Benedict (Leigh-Ann Rose). Nate Hastings (Sean Dominic) is in the same position as his significant other but continues to downplay Imani’s enormous crush on her.

What can Nate do when a highly charismatic woman like Imani refuses to back off? Elena has made it clear that she and Nate are committed to each other. But Rose’s character has decided that boundaries do not matter.

Amanda Sinclair (Mishael Morgan) visited her and Imani’s mother. Naya Benedict (Ptosha Storey) was not seen in a while. Her story line was updated through Imani’s recent mention of Naya’s stroke.

Imani is upset by her mother’s condition. But not so much as to be pushed off the relentless pursuit of Nate. The anticipated trip she should take to see her hopefully recovering mother implies that Storey’s character will either not be around too long or need ongoing care.

It will be interesting to see how this part of Amanda and Imani’s backstory plays into current developments in Genoa City, Wisconsin.

Elena left Devon Hamilton (Bryton James). That happened so that Devon and Amanda could couple. But fans wondered at that time in the plot if Elena and Nate were sustainable.

There is no doubt that Nate cares about Elena as he pursued her hard. Elena eventually gave in, realizing that her connection with Devon was not as strong as she thought.

It does seem that Elena cares for Nate. Whether she sees him as her husband and potentially the father of her future child or children remains to be seen. How hard she is willing to fight for Nate seems likely to soon be tested.

At first blush, it felt like Imani found Nate to be an attractive guy. She does not appear to have been married or have meaningful relationship experiences.

Imani comes off as a competitive personality type who feels emboldened to take Elena’s guy. Her immature behavior is below her years and has forced Amanda into uncomfortable and needless personal and professional positions.

Nate has not told Imani to back off. That makes it fair to wonder if he sees her as a future romantic option. This is daytime. So that eventuality is sure to be presented or realized.

British Royal News: Prince Harry Might Homesick For The UK

B&B Spoilers: What Does Sheila Do Next? – Finn Remains In Danger