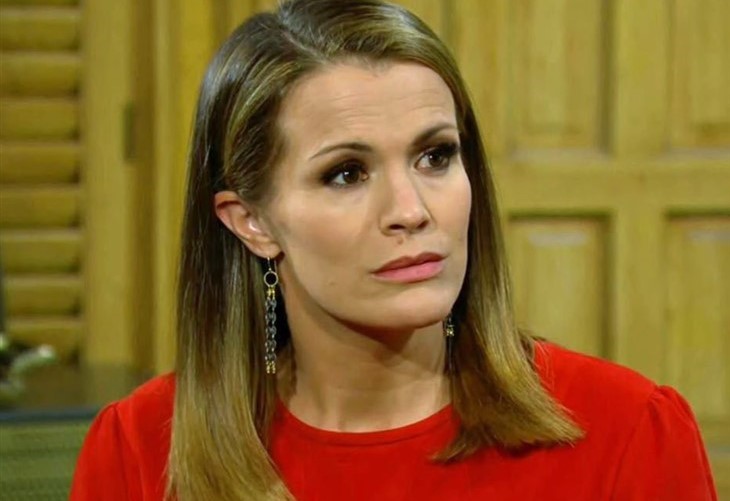 The Young and the Restless (Y&R) spoilers for Wednesday, January 19, 2022, reveal Chelsea is not ready to back down when it comes to Sally Spectra. In fact, she grows more resentful by her competition by the hour and plans to do something about it.

All Sally Spectra (Courtney Hope) did was fall for a man who already has a crazy ex-wife who tried to off the new husband of one of his other ex-wives a year ago and somehow got away with it. Now that Chelsea Lawson (Melissa Claire Egan) is back in Genoa City roaming free, she wants Adam Newman (Mark Grossman) back and has already sized up the competition.

Now, Chelsea is ready to launch an all-out war on her fellow fashion designer. She can’t have Sally stepping on her personal and professional territory so she hatches a dangerous plot to get rid of her. Will Chloe Fisher (Elizabeth Hendrickson) join in on this one too after last year’s poisoning Rey Rosales (Jordi Vilasuso) debacle? She nearly went to jail right along with Chelsea but somehow got out of the mess she never really meant to get into.

Speaking of Adam, he does something completely unexpected when he cuts a deal with Billy Abbott (Jason Thompson) of all people. After Adam accidentally killed Billy and Chloe’s daughter, Delia, it’s amazing that neither one of them is still speaking to him, much less wanting to work with him. But this show is weird and weirder things have happened. This has to be a scheme to make sure Victoria (Amelia Heinle) doesn’t get her hands on Newman Media. However, the two of them better not underestimate Adam’s big sister and Billy’s ex-wife.

As for Lily Winters (Christel Khalil), she just wants to be happy with Billy, hope he is not obsessing or lying to her, and run ChanceCom. That’s not too much to ask, right? But, will it end up being too much for her to take on when she is made yet another offer? How in demand could Lily possibly be. Stay tuned to The Young and the Restless weekdays to see how these stories play out.