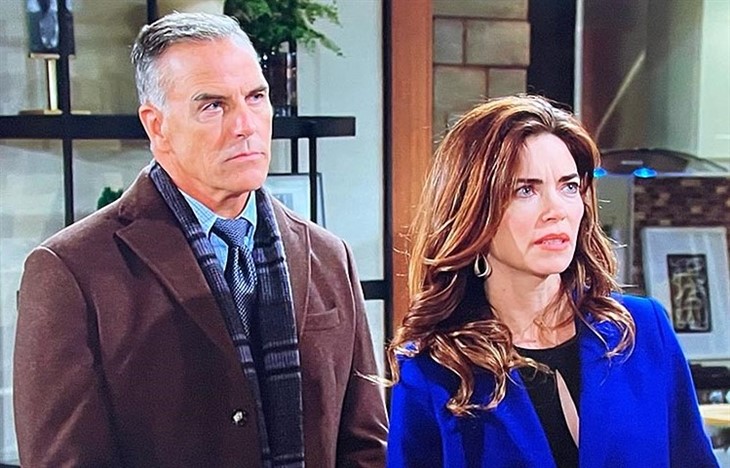 The Young and the Restless (Y&R) spoilers document that Ashland Locke (Richard Burgi) loves his wife’s similarly cold heart. Together, they plan to allow Billy Abbott (Jason Thompson) to do their bidding.

Billy’s plan to fool Adam Newman (Mark Grossman) into believing that he has reverted to his addictive pattern was disrupted by Victoria Newman Locke’s (Amelia Heinle) catch. Billy’s multiple-time wife determined that he was playing an unexpected game.

Victoria’s fortunate encounter with Billy at Society enables her to exploit the situation. If Billy can coax Adam into publishing a provably false hit-piece on him, then a lawsuit becomes possible. That can serve Victoria’s interests, which offers an opportunity for all involved.

Billy cited Victor Newman’s (Eric Braeden) out-sized influence as a reason why Victoria is acting as she is. That analysis leaves Billy a few steps behind Victoria, as usual.

It was true that Victoria once stood in her father’s shadow while working for him at Newman Enterprises. But she has since done more than just put her stamp on the family business after Victor accepted her bold offer to become Chief Executive Officer.

By partnering with Ashland, first professionally and then personally, Victoria created Newman-Locke. That company is not Newman Enterprises, and Victor is no longer just a Newman.

Billy firmly believed Victoria would not marry Ashland if she learned his backstory. But Ashland told her about his tale before the wedding, and the nuptials still were held.

It was foolish to believe that Ashland, Victor, and Adam would be squeezed by Billy’s power play. The trio turned the daytime tables on him, hard.

Now, with Victoria in the know, Billy is forced to do as Victoria commands. Lily Winters (Christel Khalil) knows that she has less pull with Billy than his ex-wife, which is increasingly concerning.

The Young And The Restless Spoilers – Ashland Locke Can Freelance

Ashland is committed to Victoria. So, he will not undermine whatever her plans are with Billy, including allowing him to believe that he could become the head of Newman Media.

However, if developments cause Victoria to become endangered or Newman-Locke’s business to be threatened, Ashland could freelance an intended outcome. Billy is the problem that needs to be dealt with no matter what measures need to be taken on Y&R.