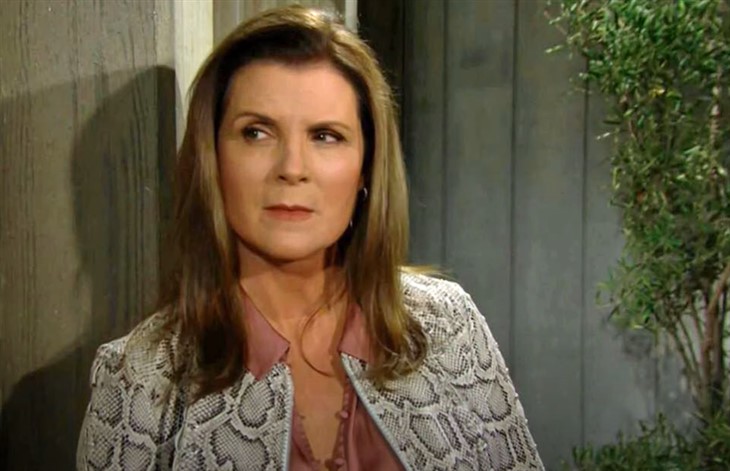 The Bold and the Beautiful (B&B) spoilers for Wednesday, January 19, 2022, reveal Taylor wondering what on Earth Sheila Carter is really up to…

Apparently, Taylor Hayes (Krista Allen) had no idea what she was getting herself into when she decided to extend an olive branch to a crazy person like Sheila Carter (Kimberlin Brown). She should have known she was going to make herself a brand-new BFF because obsession is Sheila’s middle name and if you are nice to her, she becomes fixated on you.

And if you wrong her, she will also become fixated on you and she thinks Brooke Logan Forrester (Katherine Kelly Lang) has definitely wronged her. So, Sheila wrong Brooke right back by switching out her non-alcoholic champagne with the real deal on New Year’s Eve.

When Sheila pays another visit to Taylor asking way too many questions about Brooke, Taylor begins to become suspicious. What could Sheila be up to and does it have anything to do with Brooke’s little problems as 2021 turned into 2022? That is something Taylor is determined to find out on her own.

So many men, so little time for Paris Buckingham (Diamond White), right? Between Finn (Tanner Novlan), Thomas Forrester (Matthew Arkinson), Zende Forrester (Delon De Metz), and now Carter Walton (Lawrence Saint-Victor), what’s a girl to do when so many men are all around you? They all think she’s the bee’s knees and she seems to be enjoying every moment of it. Stare at Finn’s abs, live in Thomas’s apartment, sleep with Zende, kiss Carter…who can keep track of all of Paris’s exploits? She even managed to sing the National Anthem at Dodger Stadium, which wowed her many male admirers.

Maybe Paris should because as she tries to figure out a way to let Zende down easy on this whole marriage thing, she spots Zende with another woman and is not even sure how to feel. Shouldn’t she be jealous? Or maybe she is jealous and doesn’t know why since she has all these feelings for Carter. What’s a girl to do? Stay tuned to The Bold and the Beautiful weekdays to see how these stories play out.