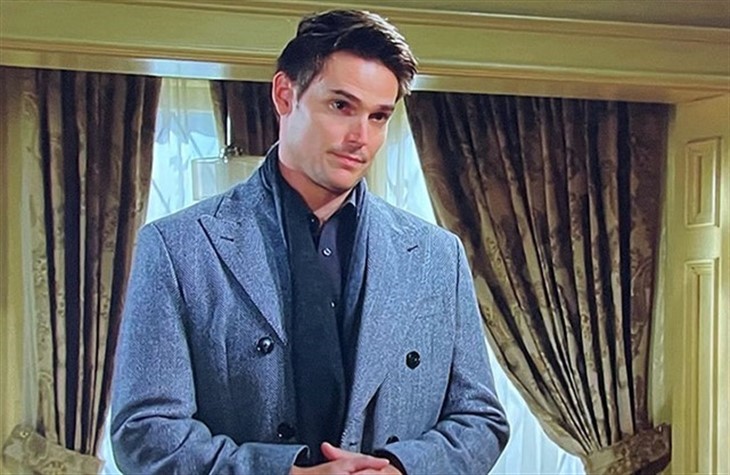 The Young and the Restless (Y&R) spoilers for Friday, January 14, 2022, reveal Adam giving Chelsea some bad news without knowing just how crazy she still seems to be.

The Young And The Restless Spoilers – Victor Newman Vs. Victoria Newman…Again

Chelsea Lawson (Melissa Claire Egan) has made it very clear she wants Adam Newman (Mark Grossman) back in her life and to be a family again with Connor (Judah Mackey). And Adam has made it very clear he has moved on and just wants to be friends and co-parent Connor. However, Chelsea is not usually one to take no for an answer and has been doing her best to spy on Sally Spectra (Courtney Hope), who she correctly sized up as her competition for Adam’s affections.

However, Chelsea is thrilled when Adam tells her that he wants to talk to her. Then, she is not so thrilled when he tells her once again she needs to face the fact that they are never going to be together again. Since Chelsea is not very good at facing facts, she spins a new con in her mind that she thinks can get rid of Sally once and for all.

Speaking of someone not very good at facing facts, Abby Newman (Melissa Ordway) finally has to face that her husband is not well and at the moment, he is not even sure he wants to raise the baby who is legally his and who he feels absolutely no attachment to.

Abby now knows that something has to be done in order to keep her fantasies alive, so she convinces Chance (Conner Floyd) to seek therapy — Sharon Roaseles (Sharon Case) anyone? — and hopes that it will do the trick and bring the Chance she fell in love with back again.

While Abby thinks that therapy can save her marriage and fantasy of a white picket fence family, Devon Hamilton (Bryton James) is not sure Dominic belongs with Chance at all. In fact, Chance’s behavior is so alarming that he and Amanda Sinclair (Mishael Morgan) spend the day strategizing his legal case for custody of the baby. Stay tuned to The Young and the Restless weekdays to see how these stories play out.