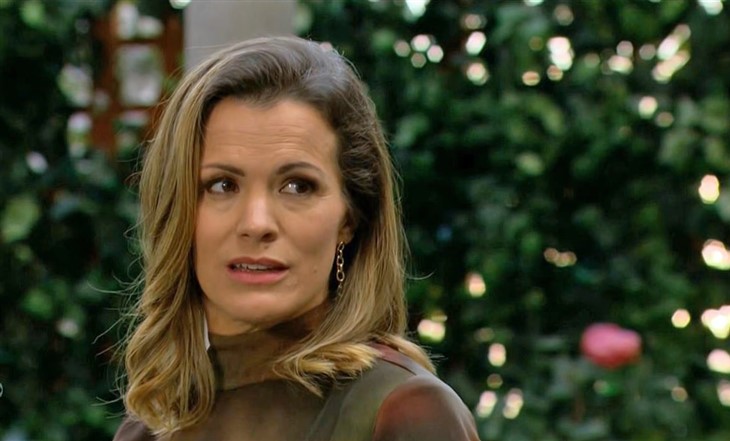 The Young and the Restless spoilers document that Chelsea Lawson (Melissa Claire Egan) might be talking herself into a corner. Adam Newman (Mark Grossman) believes she has, asking if it might be best for her to leave Genoa City, Wisconsin.

Egan is a longtime Y&R cast stalwart who debuted in 2011 when Victor Newman (Eric Braeden) hired her to manipulate Billy Abbott (then played by Billy Miller). That forced connection resulted in Johnny Abbott’s (Paxton Mishkind) birth, a subject that Chelsea has recently revisited to unexpectedly negative results.

Chelsea has been feeling vulnerable since Adam had her kidnapped in the recent past. That cruel event led to her having a stroke. The eventual resolution of that storyline was followed by her making amends with Rey Rosales (Jordi Vilasuso), who she poisoned. But his death pushed Chelsea out of sorts again.

According to The Young and the Restless spoilers, Chelsea was telling Adam that she always seems to love the wrong person, openly inferring that he was one of those men. She also said that she often makes bad choices at the wrong times.

Adam tried reassuring Chelsea, highlighting her positive influence as their son, Connor Newman’s (Judah Mackey) mother. She appreciated what he was saying but rejected the idea that she should leave town.

Chelsea was not open to his idea about the three of them having a day out or a weekend getaway, either.

Adam ditched Newman Enterprises, deciding he could no longer tolerate his father’s pattern of forgiving Victoria Newman (Amelia Heinle) all and not allowing him to hold a place of prominence in the family business.

Breaking up with Sally Spectra (Courtney Hope) was an unusual choice, as Adam was in love with her. But he felts that his need to seek vengeance would lead to Sally losing her job.

Adam’s revenge play about-face happened because Chelsea convinced him to release his anger. He then accepted Jack Abbott’s (Peter Bergman) Jabot job, where he will be the co-Chief Executive Officer.

The Young And The Restless Spoilers – Meanwhile, Nick Newman Is In

Nick Newman (Joshua Morrow) wanted no part of Newman Enterprises for many years. Then he suddenly opted to return to the fold.

Morrow’s character quickly forged an intense romantic relationship with Adam’s just-jilted ex. If Adam did that, Nick would be the first to yell and scream about it.

Fans are right to speculate about how long Nick will play the traditional Adam role, with his eye for business and lack of impulse control guiding him on Y&R.