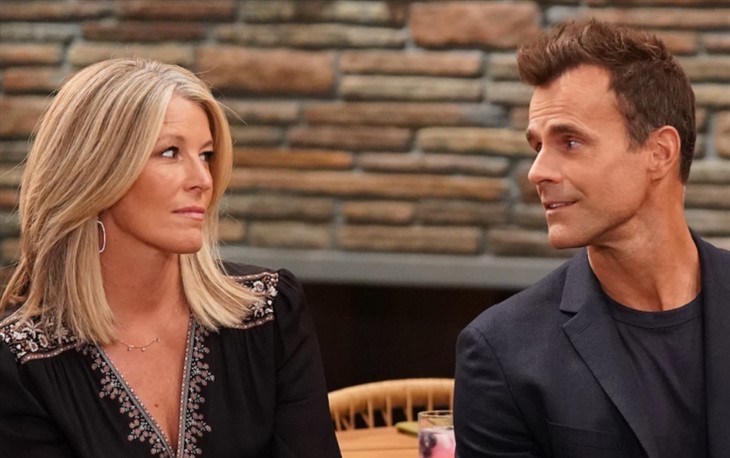 General Hospital spoilers tease that the last place Carly Corinthos (Laura Wright) would ever have expected to spend an extended amount of time is where fate has taken her. Carly was planning to go to a women’s retreat in Aruba when her plane had to make an emergency landing in Jacksonville, Florida.

According to General Hospital spoilers, Carly actually grew up in Jacksonville with her adoptive parents but she never felt that she fit in. Like many young women, Carly wanted fame and fortune more than love and family and she left to find her biological mother, Bobbie Spencer (Jacklyn Zeman) as soon as she could.

General Hospital Spoilers – Carly Corinthos Found The Life She Had Dreamed About – Then She Lost It!

Carly eventually married mobster Sonny Corinthos (Maurice Bernard) and although they separated many times over the years, they always found their way back to each other. Carly owned half of the Metro Court hotel for many years, so she also achieved the wealth she had also wanted as a young girl.

Things changed last year when Sonny disappeared for several months and was believed to be dead. Sonny was actually alive but he suffered from amnesia and was quite happy living as a bartender in Nixon Falls. Sonny had no memory of getting married and soon found himself in love with Nina Reeves (Cynthia Watros).

Sonny had been missing about nine months when his memories finally came back to him. He remembered Carly and raced back to her the moment he remembered her and they tried to make their marriage work once he moved back home. But Sonny was unable to turn off his feelings for Nina and Carly found them in bed together. Carly realized that her marriage was over and she and Sonny divorced. Carly also made a very bad investment financially and had to sell half of the hotel just to stay afloat.

General Hospital Spoilers – Carly Corinthos Returned To Jacksonville The Same As She Left It!

Carly’s unexpected return to Jacksonville put her in an old adversary’s orbit. Peyton Honeycutt (Linda Purl) had every reason to hate Carly. Carly had an affair with Peyton’s first husband when she was only sixteen years old. This affair eventually ended Peyton’s first marriage. Peyton remarried well, but her hatred for Carly is as intense as it ever was. Carly decided to stay in Jacksonville for now once she found out that her adopted mother’s grave was scheduled to be relocated to make room for a new highway. Drew Cain (Cameron Mathison) discovered that Carly never made it to Aruba so he followed her to Aruba.

GH Spoilers – Drew Cain Will help Carly Corinthos Kick Off Her Campaign To Save The Cemetery!

Carly has promised Peyton that she will stop the new highway from being constructed and that her mother’s grave would not be disturbed. Peyton was one of the people responsible for the planned highway. Carly wasn’t sure how to start when Drew suggested that they use the media to tell the story. Drew believes that if they broadcast the story all over the media, public opinion would likely fall in Carly’s favor and she would be able to obtain the support she needs to have the new highway rerouted or canceled.

Carly and Drew will certainly bond as they work together. And although Carly thought a romance with Drew was a bad idea in Port Charles, she will likely find herself falling in love with Drew in Jacksonville. But will they still feel the same once they eventually return to Port Charles?

GH Spoilers – What Do You think?

Will Carly be able to stop construction on the highway? Will Drew and Carly’s victory over Peyton lead them to make love for the first time? And can a romance in Jacksonville survive once Carly and Drew return to Port Charles? Anything can happen in Port Charles so stay tuned to General Hospital airing weekdays on ABC. And don’t forget to check back right here regularly for all your General Hospital news, information, and spoilers!