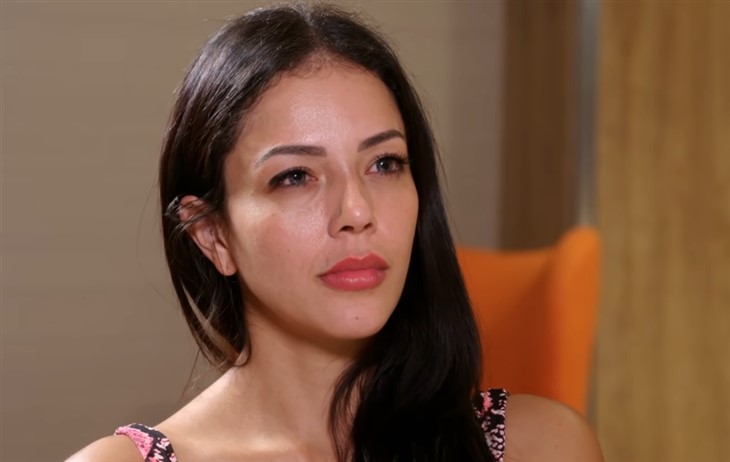 Two teasers for the 90 Day Fiancé: Before the 90 Days Tell-All reveal much about Jasmine and Gino’s relationship while totally embarrassing him.

As the latest season of 90 Day Fiancé: Before the 90 Days comes to a close, teasers are out for part one of the show’s tell-all. In two teasers, Jasmine Pineda comes out tops with shocking statements about Gino Palazzolo and their love life. In one, Tell-All host Shaun Robinson asks Gino about his contact with co-star Benjamin’s friend, Jessica. In the second, Jasmine reveals shocking truths about her physical relationship (or lack of it) with Gino.

Despite his relationship with Jasmine, it seems Gino can’t stop messaging other women. In a teaser for part one of the upcoming 90 Day Fiancé: Before the 90 Days Tell-All, Shaun Robinson asks Gino a loaded question. She wants to know if he had reached out to any fellow castmates by DM.  Immediately, it is clear that Palazzolo is very uncomfortable with the line of questioning.

Fans will remember that Gino traveled to Panama from Michigan to meet Jasmine after connecting with her online. Despite their many problems, the couple got engaged during the season. The problems included the fact that Gino sent his former girlfriend naked pictures of Jasmine that she had shared with him in private. However, once again, the Michigan native is clearly being dishonest.

When Shaun asks Gino if he has ever DM’s anyone with a connection to another 90 Day Fiancé cast member, he denies this. However, Shaun brings up Benjamin’s attractive friend, Jessica and despite this, Palazzolo says, “Uhhh, no.”

As he says this, Jasmine, who is making a virtual appearance at the Tell-All, becomes suspicious and asks why Shaun is asking these questions.

While Jasmine is known for her jealous nature, she is clearly a woman with needs. Meanwhile, it looks like Gino is not keeping her satisfied. In a second teaser from the season 5 90 Day Fiancé: Before the 90 Days Tell-All, Jasmine openly shocks viewers and fellow cast members alike.

Jasmine starts describing how Gino pleasures himself rather than getting intimate with her. In fact, according to her, the couple has only made love once during his month in Panama. While Jasmine admitted that it was enjoyable, she clearly wants more.

Part one of the 90 Day Fiancé: Before the 90 Days season 5 Tell-All airs after the season finale on Sunday at 8 pm ET/PT on TLC.

Days Of Our Lives Spoilers: Chanel’s Rescue Mission, Devil Gets Rid Of Johnny