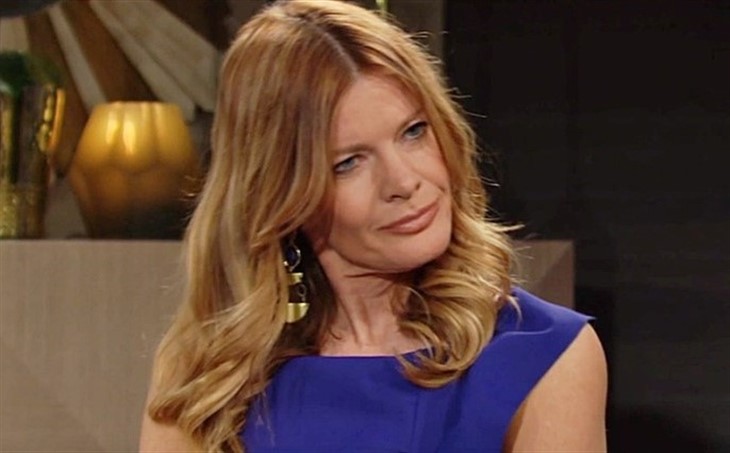 The Young and the Restless spoilers document that Phyllis Summers (Michelle Stafford) had a revealing series of conversations with Michael Baldwin (Christian Le Blanc). Fans notice that Michael often seems uniquely perturbed by Phyllis’ antics and, for what it is worth, his demeanor is often justified.

Jack Abbott (Peter Bergman) has been away from Genoa City, Wisconsin, for many weeks. He was in New York, France, and Italy. The country he just returned from is where Phyllis is headed.

However, teasers indicate that Phyllis’ will not be accepting her daughter’s offer to join Marchetti in Milan, Italy. So, that means Stafford’s character will be staying in Genoa City, Wisconsin, where Michael and others can keep an eye out for her.

The Young And The Restless Spoilers – Amanda Sinclair Sounded The Alarm

Choosing to see her children’s, Daniel Romalotti (Michael Graziadei) and Summer Newman Abbott (Hunter Tylo), and sister’s, Avery Clark (Jessica Collins), exits from GC as sole responses to her presence is self-absorbed. Amanda knew that she needed to call in a bulldog who would not allow Phyllis to continue feeling sorry for herself.

Michael served his purpose by halting her pity party. She did tell him that her feelings for Jack are unsettled, which leaves the soapy door open to a couple’s revival.

Y&R Spoilers – Not Moving To Italy This Year

Might Phyllis move to Milan to be with her daughter someday? Maybe. That could happen years from now if Summer, Kyle Abbott (Michael Mealor), and Harrison Locke (Kellen Enriquez) are still based in Italy.

As for now, Phyllis has a life that she reinvented, as the cliche goes. Her goal was to be like the fabled phoenix. She was to rise from the ashes of her ripped reputation and become a respected business leader in Wisconsin.

Phyllis earned the respect of many, which includes the grudging acknowledgment of various members of Jack’s family, along with the Newman’s, that her hotel is a success.

The Young And The Restless Spoilers – Jack Abbott Needs Time

Jack knows how he feels about Phyllis. She was initially put off by his declaration of love in the latter part of last year. But Nick Newman (Joshua Morrow) is out of her love life now.

Phyllis and Jack will remain connected in the coming weeks. Their history is known, and it now seems, based on what she admitted to Michael, that she is open to re-exploring a fresh relationship with Jack.