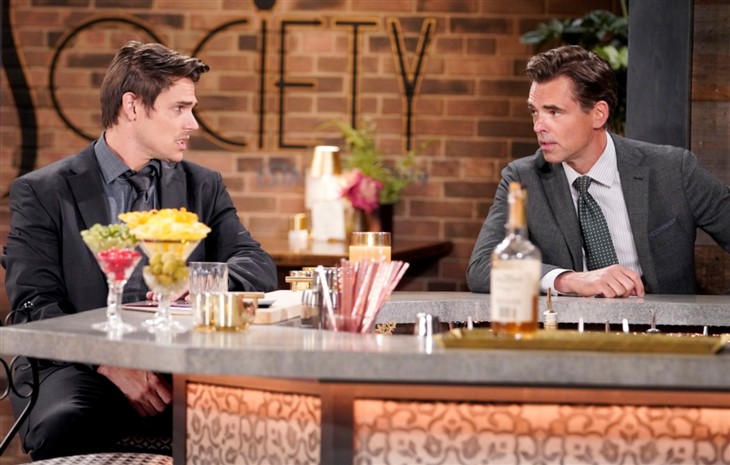 The Young and the Restless (Y&R) spoilers show that Billy Abbott (Jason Thompson) was able to save Chelsea Lawson’s (Melissa Claire Egan) life when she was in a bad place and ready to jump from the roof, literally. Billy was able to talk her down and bring her back to a place where she felt wanted and loved.

While this was a tough one for him to explain to Lily Winters (Christel Khalil), she seems to have come around to the idea and has accepted it after speaking to Chelsea herself and realizing that what Billy was great… if that’s where it ends. Of course, now there are questions about his loyalty to Lily and if he is starting to explore feelings for Chelsea again.

Adam Newman (Mark Grossman) and Billy have been at each other’s throats for what feels like a lifetime, and while Adam is thankful to Billy for saving the mother of his children, it looks like that is where it will end. In a quick interview with Soap Opera Digest, Grossman answered, “What is the dynamic like between Adam and Billy now that the latter stopped Chelsea from taking her own life?”

Mark Grossman responded saying, “Adam will always be grateful to Billy for saving Chelsea, but there’s too much bad blood to forget before they can become buddies.”

Y&R Spoilers – Will Adam Newman And Billy Abbott Ever Bury The Hatchet?

No matter what one does for or to the other, it doesn’t seem like they will ever be able to get along, of course, for decades we said that about Victor Newman (Eric Braeden) and Jack Abbott (Peter Bergman), and while they are still not friends, they are definitely able to have a conversation and speak with each other.

Perhaps one day we will see Adam and Billy get to that kind of relationship, but for now, it doesn’t look like things are about to change. Billy and Adam will continue to be at each other’s throats and that’s where it will remain. Until then, good luck to each of them it’s going to be hard to live with that much anger and hatred in your heart.

What do you think? Will there be a time in the future were Billy and Adam are able to get a long and perhaps even be friends after everything they’ve been through? Share your thoughts and remember to keep watching the CBS soap to see what happens next.